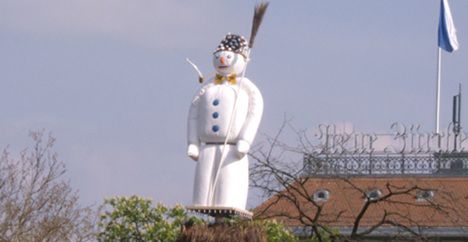 With over 100,000 people expected to attend the celebrations, Zurich is counting the hours until its spring festival, the traditional “Sechseläuten,” kicks in on Monday.

A colorful parade of 5,000 people representing the city’s once powerful guilds will cross the city center in the afternoon for a street party that culminates in the traditional bonfire of the Böögg, a 3.4 meter-tall snowman figure representing winter.

The snowman, erected on a tall pyre in one of Zurich’s main squares, will be set alight in the evening in a crescendo of dramatic music and fanfare which also includes about a dozen horses racing around it. The peak of the festival is when the snowman’s head, stuffed with firecrackers, explodes in a loud bank that marks the end of the winter season. According to tradition, the less time it takes for the Böögg to explode, the warmer and sunnier the summer will be.

With businesses closing down early to allow people to participate in the celebrations, the festival is considered one of Zurich’s main events. Top politicians as well as industry types and businessmen are expected to attend the event, which is traditionally broadcast live on Swiss television.

Sechseläuten means “six o’clock bells” and it dates back to when church bells were rung at 6 p.m. to signal summer working hours.

This year, the city departs from tradition allowing women to take part in the parade, traditionally reserved to the city’s all male guilds, private clubs that were once powerful trade associations.

The Gesellschaft zu Fraumünster, a women association, has been trying to take part in the Sechseläuten parade for years and for the first time this year they have been given permission to join.