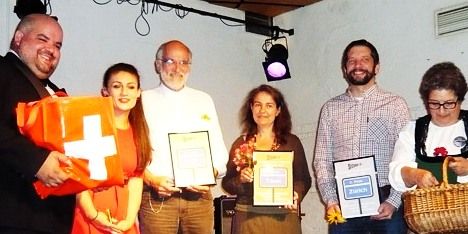 “Winning this prize is a big acknowledgement for our little village,“ Wald borough president Jakob Egli told The Local at the event in Bern.

Wald is a rural village in the canton of Appenzell Ausserhoden in eastern Switzerland with a population of 844 people, 76 of whom are foreigners.

Even though it does not have the same integration resources as other parts of Switzerland, Secondos Plus said Wald was chosen mainly because Appenzell Ausserhoden was the first canton in German-speaking Switzerland to offer voting rights to foreigners in 1999.

The fact that Wald won was unexpected as Appenzell is known to be ultra-conservative, being the last canton to grant women voting rights in 1990.

Ivica Petrusic, vice-president of Secondos Plus said: “We wanted to set an example and show that even conservative, rural areas can excel in their approach to foreigners.”

Appenzell residents voted with a clear majority in favour of the recent Swiss People’s Party (SVP) anti-minaret and deportation of foreign criminals initiatives.

“There is anti-foreigner sentiment in Wald, unfortunately, like in many parts of Switzerland,“ Egli said.

But for Secondos Plus, other factors were more important than the prevalence of pro-SVP sentiment.

In less of a surprise, Zurich notched second place.

The largest city in Switzerland, Zurich has about 380,500 residents, with almost 2 million people in the greater urban area. The city is the capital of the canton of the same name.

Almost a third of Zurich residents, or 115,379 people, are foreigners. Germans make up the largest immigrant group at 22 percent, followed by Italians.

“It is nice when the municipality is recognised by winning such an award,” Remo Blumenthal, a Zurich integration official, told The Local.

Zurich has the advantage of its location, according to Blumenthal, as there are a lot of international companies in the city.

“We understand the importance of being friendly to foreigners and try to make sure that all residents feel comfortable.”

Blumenthal explained that Zurich fosters a welcoming culture with its local government and administration targeting their offering at the whole population including foreigners.

All newcomers are invited to a welcome event and are given advice on local regulations as well as a tour of Zurich city.

Zurich also offers a special integration course for women, funding for local projects, and a programme for children who arrive in Switzerland in the middle of their education.

Blumenthal said the best way for foreigners to integrate in Switzerland is “to actively get to know one’s neighbourhood and make contact with locals.”

It is possible to do this without German in Zurich, he said, but learning the language adds an extra dimension.

When it comes to integration, the most important question in Blumenthal’s opinion is:

“Do I feel integrated? It has little to do with the Swiss passport.”

Blumenthal added that possession of a Swiss passport is more important for people from non-EU countries, especially developing countries. Armed with a passport, they feel secure and know that they can stay and build a life in Switzerland.

Thun was awarded third place. More than 11 percent of the town’s 42,330 inhabitants are foreign nationals.

Most of the town’s population speaks German, with Italian being the second most common language and Albanian third.

Thun’s transparent naturalisation procedures were a critical factor in its high ranking, Secondos Plus said.

In fourth place was Gossau, a municipality in the district of Hinwil in the Zurich highlands with a population of 9,540. Foreigners make up 10.5 percent of the population, with Italian and Portuguese the most common languages spoken after German.

Secondos Plus was founded in Switzerland about ten years ago by immigrants and those born to immigrant families. With immigrants often pilloried in Swiss politics, the group’s aim was  to portray the contribution of foreigners in a positive light.

Secondo is an Italian term used in German-speaking Switzerland that has been been adopted with pride by many of the first-generation offspring of immigrants.

Halua Pino de Magalhaes, the Portuguese-Swiss president of Secondos Plus Bern and organiser of the awards, told The Local:

“Secondos Plus is only active in German-speaking Switzerland as there is not so much anti-foreigner sentiment in the French or Italian parts because they are much more open.”

The old term given to immigrants, “Gastarbeiter” or “guest workers”, ignored Switzerland’s responsibility for new inhabitants, Pino de Magalhaes explained, as it implied that the workers were eventually expected to return to the country they came from.

The association points out that foreigners make a significant contribution to the wealth and prosperity of Switzerland, and most have never caused the country any problems.

Secondos Plus decided to institute the award partly as a reaction to the SVP’s high-profile deportation campaign last year.

Selection of criteria that make a community foreigner-friendly, according to Secondos Plus

– No accumulation of foreigners in one single area.

– Annual party at which foreigners are made welcome.

– Immigrants have the opportunity to learn German in the area

– There are opportunities for social interaction with host community, e.g. mother/parent/youth groups.

– Incentives to ensure two-year kindergarten is attended by at least 80% of foreigners.

– Welcoming play groups attended by at least 50% of foreign children.