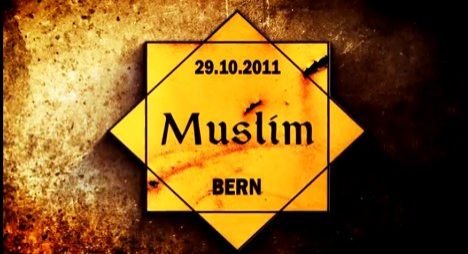 Around 2,000 people are expected to participate in the ‘Day against Islamophobia and racism’, a mini-festival organized by ICCS in the capital Bern that will run from 2 to 5pm on Saturday.

In an attempt to draw parallels between the treatment of Jews in Nazi Germany and Muslims in the Switzerland of today, many participants will wear t-shirts and stickers with the word ‘Muslim’ framed by a yellow star.

The Bern-based ICCS was founded by young Swiss converts to Islam shortly before the political initiative to ban minarets. Some in the Swiss media have labeled its president Nicholas Blancho ‘the Bin Laden of Biel’, a reference to his home town.

The organisation, which has more than 2,000 members, professes a conservative interpretation of Islam and has often made headlines in Switzerland for its provocative campaigning.

Seemingly unperturbed by the criticism, Blancho says there are distinct similarities between anti-Semitism and Islamophobia.

“We want to trigger a debate and show that the discrimination of Muslims in Switzerland is a fact,” he told Tages Anzeiger. “Muslims are treated as second-class citizens and are discriminated against, for example because they wear a headscarf or because of their name when they look for an apprenticeship or are looking for an apartment,” he added.

The symbol has outraged Swiss Jews. Edith Bino, president of the Jewish community in Bern, told the Zurich newspaper that the idea of the star is so wrong that they could not take it seriously.

Yves Kugelmann, the editor-in-chief of Jewish newspaper Zeitung Tachles, argued the provocation is “simply stupid.” He said Islamophobia is a serious issue worthy of debate, but not in such “cheap ways.” Kugelmann regretted that “a legitimate concern is raised with such false comparisons.”

According to data from the Federal Commission against Racism data, Blancho’s central point is correct: Muslims in Switzerland are subject to growing prejudice. However, other Muslim organization have taken issue with the his provocative approach, arguing it is not the right way to raise awareness.

“This festival will only intensify Islamophobia,” said Hisham Maizar, president of the Federation of Islamic Organizations in Switzerland, who prefers to work closely with the authorities on integration policies.

The festival will also include concerts and a series of speakers, such as former British PM Tony Blair’s sister-in-law, the TV journalist and pro-Palestinian activist Lauren Booth, and Muamer Zukorlc, the mufti of the Islamic Community in Serbia.

All participants have been approved by the authorities, unlike a previous ICCS event when the radical German preacher Pierre Vogel was invited to participate in one of its rallies but was refused entry into the country.