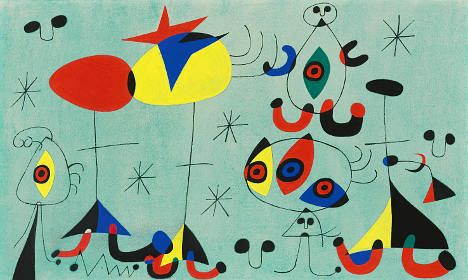 Joseph Nahmad was the first of the Nahmads to collect and deal in art, but a passion for painting wasn’t always evident in the family.

Living in Milan in the 1960s, Joseph’s father, a successful businessman, disapproved of his son’s passion for painting.

During a social event at the younger man’s flat, a small piece by Gauguin was stolen. When his father learned about it in the newspaper, he said sarcastically that his son was robbed not at the party, but when he bought the painting in the first place.

Joseph’s father could scarcely have imagined then that the family would later amass a fortune worth $3 billion, according to the 2011 Forbes’ Billionaires List.

It is estimated that the Nahmads now own more than 4,000 pieces of art from the 19th and 20th centuries – about 90 percent of which are stored in a warehouse near Geneva airport. Some are ready to be sold; others are on hold, waiting for their value to increase before going to market.

With Miró, Monet, Matisse – The Nahmad Collection, on display at the Kunthaus in Zurich until January 15th, the family has agreed for the first time to reveal the full depth of its five decades of art dealing. Even for the family itself, this is the first time they will see so many of their works brought together for an exhibition comprising a total of 100 paintings.

The collection focuses on the period between 1870 and 1970, but not all artistic movements are represented in the pieces on display. With their focus on impressionism, fauvism, early abstract painting, cubism and surrealism, the works reflect the specific tastes of the Nahmad family.

One of the highlights of the exhibition is the strong presence of Picasso: the Nahmads own the world’s second largest collection of the Spanish painter’s works, comprising a staggering 200 pieces.

The Zurich show covers almost every creative phase of Picasso’s life, with a total of 17 paintings. Some have not been shown for decades, such as Harlequin with Flowers (1923-1924), in which he painted his son Paulo

The impressionism collection is dominated by Claude Monet. “I want the unobtainable,” he once said. “I want to paint the air that surrounds the house, the bridge, the boat…” and he succeeded, as evidenced by his Boaters in Argenteuil (1874). Other representatives of the movement featured in the exhibition are Degas, Renoir and Toulouse-Lautrec.

Particularly striking are Amedeo Modigliani’s elongated, mask-likes faces. The exhibition hosts an illuminating selection of his eyeless portraits, like the one he made of art dealer Paul Guillaume in 1916, in which he uses geometrical lines to create a balanced asymmetry.

As for the cubists, the analytical Juan Gris and the geometric Fernand Léger accompany the eclectic Picasso, whose gem Sleeping woman in a mirror (1932) is on display. Here he depicts his mistress Marie Therese with her breasts sticking out from under her clothes, with one of them resembling an erect penis. With such a deformation, not identified at first sight, Picasso wanted to hint at the physical union he shared with his secret lover.

In the surrealism section, it is surprising not to see any works by Dali, the movement’s best-known representative. It seems the Nahmads were not too fond of his work and preferred to focus on other artists like Giorgio de Chirico, Yves Tanguy and Antoni Miró.

In fact, some of the most impressive paintings in the exhibition are the large-format pieces by the Catalan painter. The Nahmads were fascinated to see how Miró, despite using simple colours and shapes, always managed to create new characters and visual contexts and impressions. Snob evening at the princess’s (1944) and Birds in the night (1967) are two prime examples.

Despite the undeniable quality of the pieces on display, the Nahmad exhibition has sparked criticism among some art experts, who charge the Zurich Kunshaus with boosting the commercial interests of one of the most renowned art dealer dynasties in the world by showcasing its gallery stock.

But family member Helly Nahmad countered that it would be a pity to keep 90 percent of the family’s possessions hidden in a warehouse.

“It is like a composer making a piece of music, and no one listens to it,” he told The Art Newspaper in a recent interview, explaining one of the motivating factors behind the Kunsthaus exhibition.

“After that, we’ll have to think about future plans for the collection,” he added.