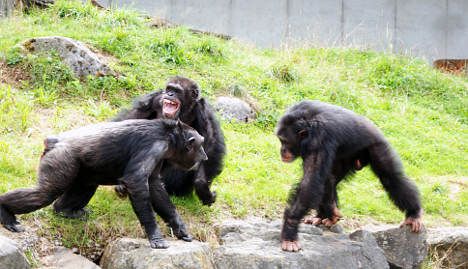 Anthropologists from the University of Zurich, led by Professor Carel van Schaik and Claudia Rudolf von Rohr, studied a group of chimps at the zoo for almost 600 hours across two years, and consulted records of chimp activity from three other zoos, news website the Huffington Post reported.

They found that certain impartial chimps would intervene in conflicts between fighting group members. The policing chimps showed neither bias to one or other side, nor any aggression.

“We were lucky enough to be able to observe a group of chimpanzees into which new females had recently been introduced and in which the ranking of the males was also being redefined,” Claudia Rudolf von Rohr, the lead author of the study, said in a statement.

“The stability of the group began to waver. This also occurs in the wild.”

The researchers found that policing members were usually high-ranking males or females. They suggested that the increased level of respect afforded these individuals was helpful in mediating aggressive behaviour.

This hypothesis was also supported by the fact that when less respected members tried to mediate, they were not as successful as their high-ranking counterparts.

It was also suggested that the reason for police chimps to take the potentially high risk of approaching aggressive group members is in order to maintain peace within the clan.

This theory is supported by the finding that the more members involved in a conflict, and therefore the greater disruption to the group, the more likely it was that an individual would intervene.