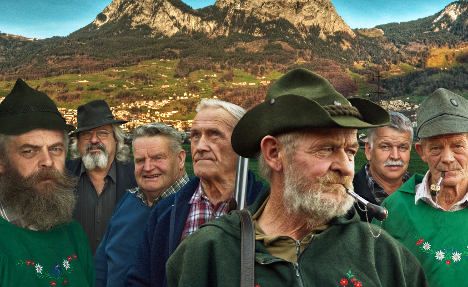 Twice a year, the weather prophets of the Muota valley, an area near Lake Luzern, meet to present their predictions for the forthcoming six months.

The six prophets, also known as the Weather Frogs, are all men of the outdoors, who say their love for, and proximity to, nature has endowed them with special divining talents. In Switzerland, they are also known as Wätterschmöcker, a Swiss-German term used to describe those who claim an ability to “smell” the weather.

Before an ever-growing crowd of members, the prophets convene at club assemblies to give their forecasts for the upcoming half year. The sage with the most accurate predictions receives a trophy and a five-franc coin wrapped in a red handkerchief.

Some ten days before the formal announcements, the six prophets meet in secret together with the club president, a priest, an actuary and the club treasurer, in a small room at the Kreuz guest house in Seewan, canton Schwyz, in central Switzerland.

“They are very special and original people,” guest house owner, Peter Rickenbacher, says of the prophets.

“They certainly have a talent for what they do – I could not do it,” he tells The Local.

The motivation for establishing the club came partly in response to the increasing reliance for weather forecasting on radio broadcasts, as it was feared that the skills of natural interpretation would be lost.

But the club was never intended to be a serious organisation, as evidenced by its statutes, and the sages are well known for their tongue-in-cheek predictions.

“The club is a very funny organisation, full of humour,” Rickenbacher said.

So popular has the tradition become in recent years that membership of the club has grown to some 3,500 strong.

“It’s become world-famous,” he says. “A real hype has developed.”

Membership costs just 10 francs ($11) a year, and entitles weather watchers to receive the twice-yearly forecasts by mail as well as to attend both meetings and dinners.

With the frogs’ pronouncements held in high esteem by many, it’s not uncommon to see them in the country’s newspapers or on the television news.

Predicting the weather has been a long-practised tradition in central Switzerland. In the country’s mountainous regions, where weather can change with great speed, the skill to interpret signs in nature and to predict the weather forecast was of great importance to local communities.

The first known prophet, Jörlieni (Georg Leonhard) Schmidig from Bisisthal, was recorded as far back as 1749, although the practice may well have been common in earlier times.

The current prophets are chosen by the club, and can maintain their position for as long as they like. They are: Alois Holdener (“Pine cones”), Martin Holdener (mouse man “Musers”), Horat Martin (“Weather missionary”), Karl Reichmuth (“Ibex hunter”), Peter Suter (“Sandblaster”) and Karl Hediger (“Nature man”).

With the next formal gathering set to take place on April 20th, the Weather Frogs don’t want to give too much away. But Martin Holdener did offer a sneak peek into what’s in store for Switzerland in the coming weeks.

“The spring won’t really arrive until after Easter. I got that from watching the mice. They haven’t taken their bikinis out yet,” he tells newspaper 20 Minutes.

Taking his inspiration from the small rodents, Holdener says he also knows what the summer and autumn will bring.

“But unfortunately I can’t reveal that yet. If I give it away I’ll end up behind bars, and I’d rather avoid that.”