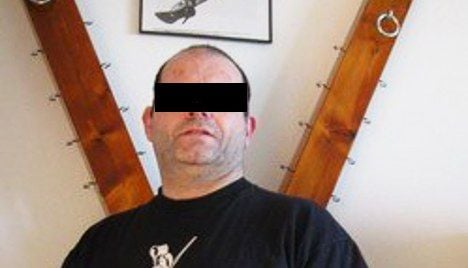 Hans Ulrich R, a convicted murderer and Winterthur council employee, put out a “wanted” ad on the internet in 2010, supposedly on behalf of his friend Peter J’s wife, the 27-year-old Patricia J, and their 12-year-old daughter, newspaper Blick reported.

The ad said the pair were offering themselves up as sex slaves and looking for a “sadistic master or butcher who can educate us mindless creatures”.

It went on to say: “We are also keen to meet gentlemen interested in slaughter and dolce who would like to roast us on a spit.”

He later told police that “dolce” in this context meant cannibalism.

A trained cheese maker, Hans Ulrich R, also known by the name “Marquis el Diablo”, co-founded the Embrachertal branch of the Conservative Party with his policeman friend Peter J. The pair had got to know each other at a gathering for sadomasochists.

Hans Ulrich told the police that he had posted the ad in the hope that someone would get the wife out of the way so that his friend, who was going through a traumatic divorce, could get custody of their children.

He was hoping Patricia would “be picked up by a butcher and never show up again”, and that she would play along with the sadomasochistic game that would ultimately result in her death.

According to Hans Ulrich, about 20 people responded to the ad, one saying that he had a special dungeon in his farm basement.

Another described himself as an “ideal and very experienced master butcher”. Hans Ulrich responded, detailing the woman and girl’s supposed sexual repertoire.

Luckily for the would-be victims, the “master butcher” turned out to be an undercover policeman. He arrested the killer in October 2010.

Hans Ulrich had previously served ten years in prison for the murder in 1988 of a woman he found sleeping in her car. Having shot her several times, he dragged her into the woods and impaled her naked body on a tree branch.

Although reports found that he was unable to control his aggressive tendencies, he was nevertheless released and later secured a job with the Winterthur town council.

He now faces charges of plotting murder. The trial begins on Wednesday.