The training uses real guns loaded with ‘soap bullets’, a kind of paintball used by special forces for training purposes.

“The fact that everyone gets a weapon without risk assessment is not acceptable,” Chantal Galladé, President of the Security Affairs Committee of the National Council and member of the Social Democratic Party of Switzerland, told online news site 20 Minuten.

Participants signing up to the SWAT training (www.swattraining.ch) pay 290 francs ($309) for a full day’s training. This includes theory and rental of all equipment such as a gun, helmet, gun holster, radio and SWAT vest.

Bookings are taken for corporate events, and stags, and women are actively encouraged to “show off their female power and bring the bad guys down!” Participants can choose to “neutralize” bank robbers and terrorists, who are played by ex-policemen.

“Our training is more than paintball for adults. After five minutes, you believe you are in a real situation,” SWAT training organizer, Roman Bader, told the website.

The bullets used in the training are harmless, but sting and leave a dye mark.

Politicians are concerned that extremists could take advantage of the training, given by former members of the Special Forces, to gain intelligence on the tactics used.

“This is not adventure game stuff,” Gallade said.

“I expect the police and the army to review the training to ensure that no secret security tactics are disclosed,” she said.

Bader has promised that participants are only shown what is already known to the public.

“We are not a training camp for right-wing extremists and would-be Taliban,” he said. 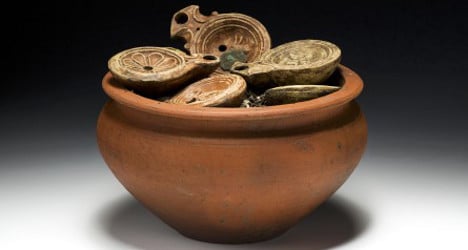 The pot was found under a street in the commune as part of an archaeological examination prior to the construction of a big new development comprising apartment blocks and commercial buildings, Aargau cantonal authorities said in a statement on Monday.

It is thought to have been buried almost 2,000 years ago, dating it from the time of the Roman legion camp Vindonissa, which was located near where Windisch is now.

Previous archaeological digs in the area have unearthed evidence of human habitation dating from the Roman era, including the foundations of buildings.

But this discovery is the most exciting – and mysterious – yet, feel archaeologists.

The pot is typical of the cooking pots used by soldiers stationed at Vindonissa, however the purpose of its contents – 22 oil lamps, each containing a carefully placed coin – is rather more mysterious.

The bronze coins are low-value, indicating a symbolic gesture, and date from AD66-67.

“What astonished us was the quantity and the combination of coins and lamps,” said Aargau cantonal archaeologist Georg Matter.

“We suspect this is a ritual burial,” he said, but stressed that was only speculation since there haven’t been any other comparable discoveries.

The pot also contained charred fragments of animal bones, ruling it out as a urn for human remains.

“The intentions behind this burial are puzzling at the moment,” added Matter.

Vindonissa was a Roman military camp until 101AD, after which time the area continued to be settled by civilians.


The pot was found under a street in Windisch. Photo: Aargau canton archeology department