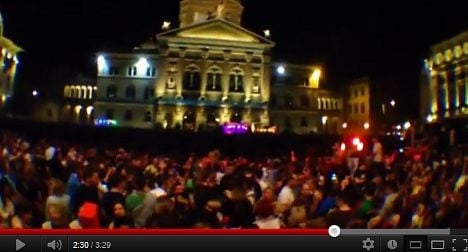 More than 10,000 young people were rallied together by social networking sites for the largest street party in Switzerland in over 20 years, newspaper Tages Anzeiger reported.

The group, calling itself “Dance Yourself Free”, protested against the recent measures taken in the city to restrict Bernese nightlife.

In particular, the nightclub “Basement” has been forced to close down following noise complaints from neighbours, and another, the “Reithalle”, has had to close its outside bar earlier, again because of problems with neighbours.

Unlike cities such as Lausanne, nightclubs in Bern are located in residential areas, meaning that confrontations with residents are becoming increasingly the norm, newspaper Tribune de Genève reported.

The police did not interfere with the party, although it had not been given permission to take place. For the most part, revellers were demonstrating against the restrictive measures taken by Bern against party organizers, arguing that the needs of the youth were being ignored.

Some also protested against capitalism, while others just came to dance. The party-lovers left over 20 tons of rubbish behind them, more than after festivals like Fasnacht.

A few graffiti artists were at work too during the night, spraying a variety of Bernese buildings, including the Federal Palace.

The streets themselves also received a spray of a different kind: the Bernese security director complained that the “whole city was used as a urinal”.

Nevertheless, significant rainfall on Sunday night helped clean the streets, and for the most part the authorities were pleased simply that nothing more serious transpired.