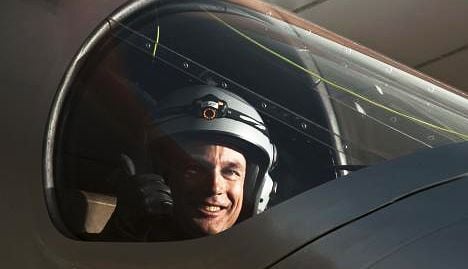 Piccard’s grandfather, physics professor Auguste (1884-1962), is credited with making the first exploration of the stratosphere, climbing 16 kilometres (10 miles) in a hot air balloon in 1931.

Turning his attention from the skies to the bottom of the ocean, the man on whom Tintin creator Herge modelled his likeable Professor Calculus went on to invent the bathyscaphe, a deep-sea submersible allowing man to plumb the depths of the seas as never before.

His son Jacques, Bertrand’s father, took up the technology and performed, along with US navyman Don Walsh, the world’s deepest dive in 1960, dropping 10.9 kilometres (6.8 miles) to the floor of the Mariana Trench in the western Pacific.

Not until earlier this year, more than half a century later, was the feat repeated by “Titanic” director and ocean enthusiast James Cameron.

It was through his explorer father that Piccard junior was able to meet many of his childhood heroes, including Charles Lindbergh, the first man to fly solo across the Atlantic.

His own fascination with air travel started with hang-gliding and in the 1980s Piccard became the first person to cross the Swiss-Italian Alps in a microlight.

The trained psychiatrist returned to the family tradition of hot air ballooning in 1992 when he was recruited by the Belgian Wim Verstraeten to take part — and win — the first transatlantic balloon race.

In 1999 Piccard, accompanied by the Englishman Brian Jones, went a step further and completed the first non-stop balloon circumnavigation of the globe in a little less than 20 days.

Now aged 54, the Lausanne-born father-of-three is once again testing man’s travel boundaries just as his grandfather and father did before him.

With the transcontinental solar flight from Spain to Morocco under his belt, Piccard will in 2014 embark on his ultimate mission: taking his sun-powered craft Solar Impulse on a round-the-world trip without using a drop of fuel.

As well as sating his adventurous impulses, Piccard is also flying the flag for renewable energy.

“We believe that if an airplane can fly around the world with no fuel, nobody can say after that it’s impossible to do it for cars, for heating systems, for air-conditioning, for computers…,” Piccard said while promoting his project at the World Future Energy Summit in Abu Dhabi in 2010.

His inspiration? “I come from a family of explorers who always had a lot of concern for the environment and for natural resources,” he said.