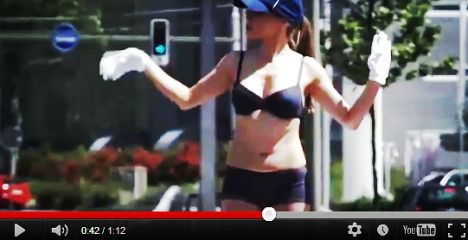 The Berne Declaration, a non-governmental organization dedicated to promoting equitable and sustainable relationships, has launched the new advertising campaign in which policemen, paramedics and railway workers appear in their underwear with the slogan: “Better to be half-naked than in uniforms made in inhumane conditions”.

The survey, carried out by the Berne Declaration, has found that many uniforms in Switzerland, not only for public sector workers, but also for private sector workers at places like Coop and Starbucks, are being manufactured mostly in Macedonia, newspaper Tribune de Genève reported.

“These plants practice the minimum wage,” said Geraldine Viret, spokeswoman for the Berne Declaration. But in these countries, this amounts to 20 percent of the minimum amount needed to survive. This is exploitation.”

The report estimated that one quarter of the Swiss population, equivalent to half of the workforce, wear uniforms made in these conditions.

Although Swiss businesses are only able to enter into contracts with foreign companies that adhere to the standards set by the International Labour Organization, Viret told the newspaper that holes exist in the legislation.

The Berne Declaration does not want companies to pull out of their contracts with Macedonia, as the organization fears that further job cuts would follow in a country where unemployment is already high.

Instead, the NGO hopes to draw attention to the issue, so that Switzerland goes further than simply requiring that workers be paid the local minimum wage.