The letter, which came from the word-famous physicist’s private collection, was auctioned by the Fischer Gallery in Lucerne for 174,000 francs ($182,204), significantly more than the 25,000-35,000 francs predicted.

Handwritten in 1917 on both sides of a sheet of paper, the letter was sent to German Jewish industrialist and politician Walther Rathenau, who was assassinated by a right-wing extremist in 1922, a year after he had been made minister of foreign affairs, newspaper Tribune de Genève reported.

In the note, German-born Einstein, who became a Swiss national in 1901, hailed the benefits of small states and cited Switzerland as an example. He thought that only small self-contained states would be sustainable, but noted that Switzerland’s cantons were too small to afford all the essential functions of a state.

He pointed instead to the German district of Brandenburg as having the ideal administrative size.

A painting by Swiss painter Albert Anker, “Dead nature with coffee”, was also sold at Wednesday’s auction for 2,315,000 francs, the most ever paid for a still life by a Swiss painter. 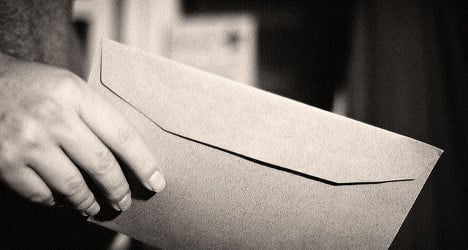