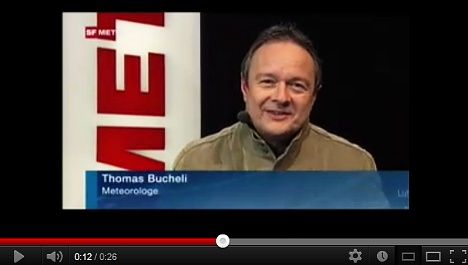 The weatherman, Thomas Bucheli, from Swiss television, appeared in court on Thursday describing how a 51-year-old woman had been stalking him and harassing his family for over ten years, online news site Blick reported.

The woman, who is a diagnosed schizophrenic, had first met Bucheli in the cafeteria of the television network Schweizer Fernsehen over ten years ago. At the time, she was sending numerous emails to one his colleagues, Alex Rubli.

She said she was emailing Rubli because she wanted the weather team to stop sending her hidden messages on her television screen.

Bucheli said it was absurd and she should stop. But instead of preventing her from sending more emails, he inadvertently diverted her attention away from his colleague and onto himself.

At one point, Bucheli called her on the telephone to ask her to stop.

“That was a mistake,” he said, as she then had his number. After that she began to call him up to 20 times a day, including at night, both on his mobile as well as on his family’s fixed line phone.

She sent many emails, letters and packages, and also showed up at his home one day, trying to force open the door, online news site 20 Minuten reported. Between August and September 2011, she sent him 227 emails.

When asked by the court whether she was in love with Bucheli, the lady replied that she didn’t want to be cheesy, but she liked his upbeat way of presenting on television.

In court on Thursday, her lawyer denied that her client had harassed Bucheli, arguing instead that he had given her his number voluntarily, and that he had never actually asked her to stop contacting him.

The woman, who was finally arrested last year on the television station premises, was committed to a secure psychiatric unit on Thursday.