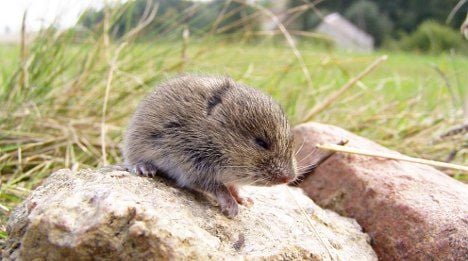 For the past two years, farmers have complained of the extraordinary invasion of voles in the Jura mountains. At the height of spring, their numbers were estimated at 1,000 animals per hectare, newspaper Tribune de Genève reported.

The rodents’ arrival, labeled a “swarm” by Vincent Wermeille, a farmer and member of the Grand Council of the Jura, has destroyed crops and caused millions of francs worth of damage.

The invasion has affected all peaks in the canton, Jean-Paul Lachat, head of the Centre of Rural Economy of the Jura, told the newspaper. With the crisis at its height, not even the extensive laying of traps helps to keep numbers down, he added.

Even the football pitch at Saignelégier has become unplayable after the animals wrecked the ground, leaving mounds all over and the surface unstable.

Last year, the voles ate every single blade of grass from certain fields.

“The fields were brown, it was like a desert,” farmer Rudolph Ackermann told the newspaper.

Some had got so fat, they no longer took their own tunnels, instead preferring to wander along the roads.

Even though the farmers have planted seedlings to replace some of the grasses eaten by the voles, certain fields are only expected to give some 50 percent of their yields.

“Some farmers are already at the wire,” Wermeille told the newspaper. “The problems will come in November or December when there won’t be any grass left.”

The farmers fear the worst once more, and worry about the cost of buying cattle feed from neighbouring France, as they were forced to do last year. The breadth of the problem also raises concerns that the price for alfalfa, bought as a replacement for the missing haystacks, will rise if everyone buys at the same time.

Farmers are now seeking help from Bern, wanting indemnification for the damage caused. But Denis Morand from the Federal Office for Agriculture advised that the extent of support demanded by the farmers could not be given.