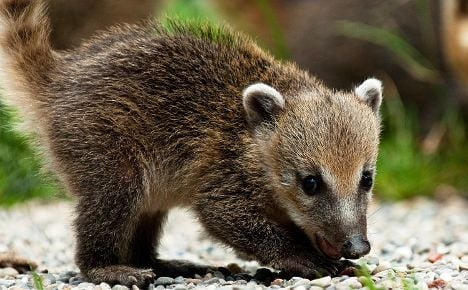 The snow leopard cub was born at the end of April and has been named Mohan. It is the fifth cub to have been born at the Zurich Zoo. The cub’s father, named Villy, has been assisting in the raising, a phenomenon rarely seen in the wild due to the animal’s solitary nature, news site NZZ Online reported.

He has had the cub between his paws and been licking him clean, while mother Dshamilja, originally from Kazakhstan, looked on. The cub is very lively and interested in its environment, the zoo reported.

Six baby coatis have also been born to two mothers. The animals have only recently been united together in one family, having started off their lives in separate boxes until the young were mobile. The group was able to expand thanks to the introduction of a male to the group last autumn.

Coatis are also known as Brazilian Aardvarks, and are members of the racoon family. The babies, which were all born in April, will be suckled for approximately four months, and will reach sexual maturity at two years old.

The arrival of three Great Grey owlets, one of the largest species of owl in the world, has also been celebrated. To the zookeepers’ amazement, one of the chicks was born albino – the birth of an albino owl chick in captivity has never before been recorded. It is unclear whether the chick will retain its snowy white down as it proceeds into adulthood.