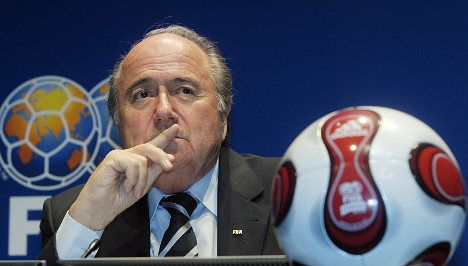 Blatter, who succeeded Havelange as the head of world football's governing body in 1998, insisted in midweek he did not have the power to punish Havelange after the accusations against the Brazilian.

The bribes, made by International Sport and Leisure (ISL), were detailed in documents made public by Switzerland's supreme court and published by the BBC on Wednesday.

FIFA's discredited Swiss-based marketing partner collapsed in 2001 with debts of around $300 million.

Blatter insisted on Thursday he was powerless to sanction his predecessor and added that such payments were not illegal under Swiss law at the time.

On Saturday, Blatter told Swiss newspaper Sonntagsblick in an interview for publication on Sunday: "I did not know until later, after the collapse of ISL in 2001, about the bribery.

"When I now say that it is difficult to measure the past by today's standards, this is a generic statement. To me bribery is unacceptable and I neither tolerate nor seek to justify bribery. But this is what I am accused of now.

"The Swiss Federal Court has this week proven wrong all those people, who for years have accused me of having taken bribes.

"Now it is on record what I have always said: I have never taken nor received any bribes. Now the same people are trying to attack me from a different angle: Okay, he has not taken any bribes but he must have known.

"Once again I only knew after the collapse of ISL years later. And this is because we instigated the whole matter. The people who attack me now know this is the case but still they persist. They want me out."

Earlier on Saturday, the German football federation (DBF) expressed dismay over the whole issue, which it deemed portrayed Blatter in a negative light.

DFB chairman Wolfgang Niersbach said he was "shocked" at Blatter's comments about the payments not being illegal under Swiss law at the time.

"The reaction of the president of FIFA shocked me. If FIFA people, and not the lowest among them, received money and the response is that that this was not illegal at the time then we at the DFB can only distance ourselves," Niersbach said on the sidelines of a meeting of Bundesliga referees.

Responding to comments from Bundesliga chairman Reinhard Rauball, who wants Blatter to resign, Nirsbach said: "That is a decision for him."