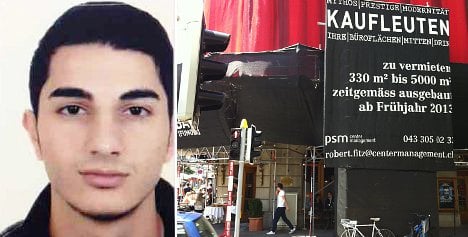 The suspect, who works selling kebabs at Zurich's main train station, has been missing since one of the brothers was killed and the other sustained serious injuries in a fight outside a nightclub in the early hours of Sunday morning.

Mohamed's mother says she has not seen him since he got ready to go out on Saturday night, and he failed to appear for work on Sunday evening.

“I cannot tell you how sorry I am for the family who has lost a son,” Shivan’s mother, 43-year-old Sameerah S, told news site 20 Minuten Online.

The murder suspect and the victim knew each other, friends have told the police. They had never had any trouble with one another before and were not enemies.

Mohamed’s friends say that the brothers, Vigan M and Visar M, tried to beat him up outside the Kaufleuten club. None of them knew that he was carrying a knife.

“He must have acted in self-defence,” one of Shivan’s friends told the website.

Police have reported that the 23-year-old Vigan M, who was out celebrating his birthday, was stabbed seven times, while his younger brother, 20-year-old Visar M, received three stab wounds to his stomach, online news site Blick reported.

“I am convinced that he wanted to kill my two sons," the brothers’ father, 51-year-old Ismet M told Blick.

Shivan’s mother still hopes that her son is not the murderer, and insists he never causes any trouble. But the police have confirmed that they have had to deal with him previously on several occasions for fighting.

Two of Mohamed’s friends were arrested on Monday and taken in for questioning. Both were released a short time later.

The search warrant has been issued across the Schengen area in Europe.

Vigan M is due to be buried in Kosovo alongside his mother, who died from cancer at the age of 25.