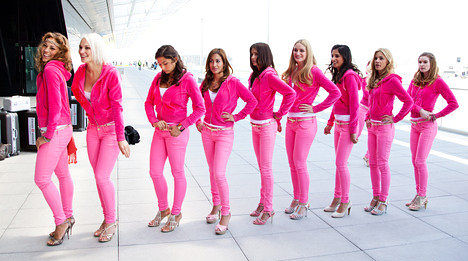 Fueled by pre-release buzz in Switzerland, the 92-minute film is certainly the most talked about home-grown entry in the 65th annual festival, which runs from August 1 to 11.

The violent moments are reportedly parodies of scenes from classic horror films, alternating thrills, chills and laughs, along with eyefuls of fetching young women.

The cast includes real Swiss beauty queens such as Vinzens Nadine, winner of the Miss Switzerland crown in 2002 and Jennifer Hurschler, who came third in the 2010 pageant.

The star is a new discovery, Meryl Valerie, a 22-year-old from Zurich who studied at the Lee Strasberg acting school in New York.

The film was shot with a three-million-franc budget in southern Thailand under 42-year-old director Michael Steiner.

Some reviewers have pointed to the film as a metaphor for the Miss Switzerland event itself, which was killed off this year due to lack of funding.

With subtitles in English and French, the film is set to be shown at Locarno’s main outdoor venue, the Piazza Grande, on August 10.

Das Missen Massaker is one of two Swiss feature films to be shown in the square this year, the other being "Nachtlärm" by Christoph Schaub.

Two Swiss documentaries, "The End Of Time" by Canadian-Swiss Peter Mettler and "Image Problem" by Simon Baumann and Andreas Pfiffner, are competing for the Golden Leopard award.

A total of 13 international films are set to premiere at Locarno this year, including Steven Soderbergh’s Magic Mike.

Three hundred films will be shown, with the festival to be opened next Wednesday by Nick Love’s "The Sweeney".

Veteran French actor Alain Delon is to receive a "Life Achievement Award" while producers Johnnie To and Peter-Christian Fueter will be honoured with Leopards for their careers.