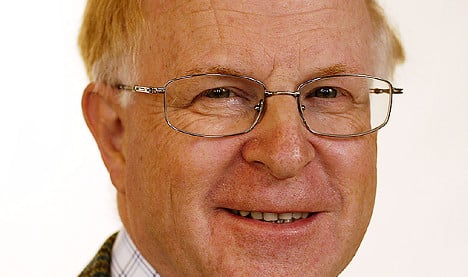 A Swiss citizen of Palestinian origin reported the 67-year-old politician to the authorities after reading the article he wrote for the Blaulicht newsletter, newspaper Tages-Anzeiger reports.

In his article Schlüer, who lost his seat in the national parliament last autumn, described witnessing a fight in Flaach, where he lives. As he looked on, he said, a group of Palestinian asylum seekers attacked each other “like animals”.

The community, he said, had been told the asylum seekers coming to Flaach were refugees in danger of losing their lives if not granted protection in Switzerland.

“In fact, what arrived was scum,” he wrote, adding that Palestinians in general should not be granted asylum in Switzerland and should instead be sent home.

Chief prosecutor Hans Maure confirmed that the Zurich prosecutor’s office had received a complaint about the article.

David Gibor, the lawyer representing the complainant, said he hoped the criminal proceedings against Schlüer would be as “vigorous and passionate” as the politician’s opinions.

Too many executives come from abroad, SVP deputy says. Photo by AFP

In an interview Saturday with the local media, Martullo-Blocher argued that workers from the EU “are taking the place of the Swiss” in the job market.

“And the situation is deteriorating even more because of the coronavirus pandemic”, she noted.

Martullo-Blocher is the daughter of Christoph Blocher, a major figure in the SVP — a right-wing party whose objective is to curb immigration to Switzerland.

She also said in the interview that numerous Swiss companies are managed by people who come to Switzerland from the EU nations.

“Some of them don’t know our business environment and don't have the same interests for Switzerland as we, the Swiss business leaders, do”, she said.

Numerous Swiss companies, including Nestlé, Novartis, and Roche, are managed by foreigners.

Martullo-Blocher spoke to the media just weeks ahead of a controversial SVP referendum to be held on September 27th.

The initiative calls for Switzerland to be able to regulate its immigration autonomously, and not based on treaties with the European Union.

Therefore, the Free Movement Agreement with the EU and EFTA should be re-negotiated, she said.

The agreement allows people from the EU and EFTA nations to work in Switzerland.

However, another SVP politician, Marco Chiesa from the canton of Ticino, told Neue Zürcher Zeitung newspaper that job preferences should be given not to the ‘Swiss’ as such, but to anyone who lives in Switzerland.

He added that he is in favour of immigration that benefits Switzerland, as the country always needs foreign specialists.

According to the Federal Statistical Office, about 1.4 million citizens of EU member states currently work in Switzerland. The country's total population 8.5 million.

Additionally, a total of 332,177 cross-border workers from France, Italy, Germany and Austria are employed in Switzerland.