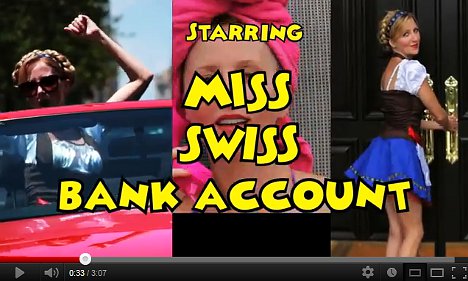 The satirical YouTube video features a plaited blonde dressed like a scantily-clad Heidi who sings about how great Romney’s life is, replete with tax shelters and all the trappings of being super-rich — fur coats, hot tubs and luxury sports cars.

“I’m a Romney girl, in a Romney world,” the woman sings to the tune of “Barbie Girl," while cavorting with an actor playing the Republican candidate.

The song’s allusions to Switzerland as a place where rich people escape paying taxes has riled Presence Switzerland, a part of the Swiss Federal Department of Foreign Affairs, which aims to foster a positive image of the country.

The three-minute 'Romney Girl’ video, launched earlier this month, is the latest American political ad to sully the Swiss as aiders and abettors of tax evasion.

“Our ambassador has signalled to the campaign staff of (President) Obama that the Swiss government has little appreciation for the use of these clichés far removed from a country that fights with energy against the presence of non-taxed money in the heart of its financial sector,” said Nicolas Bideau, head of Presence Switzerland.

He was quoted in a report carried by various newspapers in the Edipresse chain, including Le Matin and the Tribune de Genève.

While concerned about the image such videos present, Bideau said the government did not plan to make a formal intervention over the issue.

“It would be inappropriate to take a position in the context of a presidential campaign,” he said.

In fact, the video did not officially come from the Obama campaign, which is making an issue over Romney’s failure to disclose income tax returns.

It was financed by the Agenda Project/Action Fund, which calls itself a “progressive policy organization dedicated to ensuring that public officials — and the policies they implement — serve regular Americans”.

Eric Payne, president of the fund, said the goal of the light-hearted video is to “spark people’s interest  in understanding more about (Romney’s) taxes", according to a report from ABC News.

The song takes a jab at the Republican candidate for his estimated net worth of $255 million and suggests that his life is just one long party, in contrast to the life of many suffering Americans.

“Silver-tip your hair, tax shelters everywhere, outsource nation, Bain is his creation,” sings the Swiss Miss who jumps into a red convertible driven by the Romney character and asks him if he has “something to hide”.

Romney was a founder of Bain Capital, an investment company that has been criticized for creating wealth by buying up companies and laying off workers, while his personal use of offshore bank accounts has also fueled debate.

Switzerland is referenced in the video as one of several tax havens.

The video is backed up by a RomneyGirl.org website, which gives a fictitious biography of “Miss Swiss Bank Account”, saying she hails from Ostermundigen and is the “proud daughter of a Nestlé chocolate factory worker”.

Among things, she is described as a former tax consultant of offshore bank accounts at UBS in Geneva, where she first “met” Romney.

Bideau said the video employed “hackneyed clichés” that have been regularly used by Hollywood for decades, playing on banking secrecy and other stereotypes.

But overall, he maintained, Switzerland has an “excellent image” in the US as a country with a high quality of life, a strong and varied export industry and “direct democracy (through referendums) which greatly impresses Americans”.

Still, in view of the negative publicity surrounding tax evasion in the US and Germany, the Swiss federal government decided in June to boost its public relations and lobbying efforts in those countries through Presence Switzerland.

The department has also embarked on an “issues monitoring” process which involves monitoring foreign press reports on subjects liable to harm Switzerland’s image.