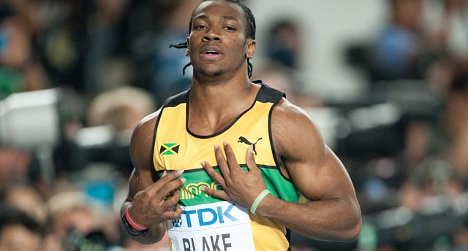 "I am definitely very pleased. It was a good run for the end of the season. I just wanted to have fun," said Bolt.

Earlier, Blake became the second fastest man over 100m when he clocked 9.69sec.

World champion Blake, who was silver medallist behind Bolt at the London Olympics, finished ahead of America's Tyson Gay in 9.83sec with Nesta Carter of Jamaica in 9.95sec.

Blake, 22, improved his previous personal best of 9.75sec to move into second place on the all-time performers list which he now shares with Gay who has also run 9.69sec.

"I am delighted," said Blake. "I have been sick all week with flu but I am glad I recovered. My coach (Glen Mills) had told me that I could run faster than 9.75sec, a lot faster."

"I saw him in training and I could tell he was going to run fast," said Bolt

Fraser-Pryce had defeated Jeter in the final at the Games earlier this month, but she took victory on Thursday, dipping just at the right time at the line with both runners clocking 10.86sec.

"I always want to win and when you do it feels pretty good," said Jeter.

"It was just like the Olympic final, I had to fight to the finish because Shelly-Ann has had such a great season. She's a great starter and fantastic competitor.

"She always brings her A-game so you have to bring yours."

Jeter also reflected on the United States women's 4×100 metres relay win at the Olympics which shattered one of the longest-standing and most controversial world records.

The American quartet, anchored with a stunning final leg by Jeter, sliced more than half a second off the 27-year-old record set by the former East Germany in 1985.

"It was an epic moment. Everyone said it could not be done," said Jeter.

America's Jason Richardson won the 110m hurdles in 13.08sec in a race devalued by the disqualification of Olympic champion Aries Merritt for a false start.