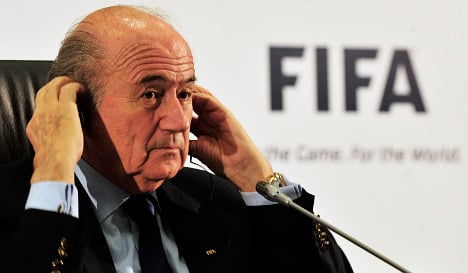 The 76-year-old administrator took over the top role at the Zurich-based organisation in 1998, seamlessly moving up from the position of
secretary-general he had held from 1975 under his predecessor, the Brazilian Joao Havelange.

He comfortably won re-election for a fourth term in June, 2011 despite ongoing investigations into alleged financial irregularities at the heart of
the organisation and mutterings over his style of leadership.

Since then things have gone from bad to worse for Blatter with allegations of vote-rigging marring the allocation of the World Cups for 2018 and 2022 and widespread criticism of his outspoken statements on a variety of controversial subjects.

Most recently Blatter came under heavy fire from his erstwhile football authority allies in Germany after he insisted he was powerless to do anything
to sanction Havelange after the Brazilian was accused of taking bribes during his long stint as FIFA chief.

In an exclusive interview with AFP, Blatter insisted he had no intention of standing aside prematurely and was determined to continue with reforms he said were making the FIFA organisation more transparent and answerable.

"Yes I have already made that clear," he replied when asked if he would see his fourth term through till the end. "Just allow me to finish it off in a
proper manner.

"I want to be able to complete my work which has not been as bad as it is made out to be in some sectors of the media and in certain parts of the world.

"If I do not succeed in putting the FIFA organisation back in good order, I will have failed. But I am certain I will succeed."

"Football incites great passions, football can be crazy. But I must say we now have this Anglo-Germano alliance which is not at all natural if you go by world history. Great Britain and Germany have never been allies."

While having identified the failed English bid to host the 2018 World Cup finals as the reason for the ill-feeling toward him from much of the English
football fraternity, Blatter said that much of the opposition to him from Germany came from the clubs.

He said that the Bundesliga outfits were envious of the money that FIFA was making on the back of countries using their own club players at international level.

"All that is open for discussion. Personally I am willing to talk about this and maybe then they will stop saying 'Blatter you have been in the job
long enough, it's time to go.'"

Turning to the question of his own successor, Blatter said that he still believed French legend Michel Platini was the best bet, despite strongly
disagreeing with him over the question of the Euro 2022 tournament possibly being shared out between several European cities.

"He was my disciple," he said of Platini, with whom he has long held cordial ties.

"But I think that when he makes the move from the (UEFA) confederation to the (FIFA) presidency, he will have to view football from another dimension.

"It is very much easier to lead UEFA, which is a wealthy organisation, which has everything. He is in a comfy armchair there.

"In any case the last time we spoke about this he told me that he would not be the same kind of president than I have been. But each president has his own style.

On other matters Blatters said that:

– He was in favour of a limited introduction of goalline technology, citing the infamous case of Frank Lampard's disallowed goal against Germany in the last 16 of the 2010 World Cup in South Africa. But was against the use of video playbacks in other areas of contention during games.

– He was against increasing the number of teams who qualify for the World Cup finals from the current 32 saying that this figure was much easier to
organise into eight groups of four, with the top two going through to the last 16 and so on.

– He was confident that preparations in Brazil for the 2014 World Cup were firmly on track after fears were expressed that they had badly fallen behind.

He said the recent progress made was mainly due to the concerns expressed by FIFA and the fact that a member of the Brazilian government had been co-opted onto the organising committee.