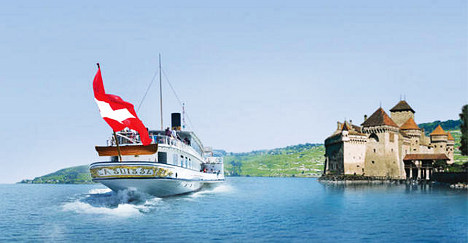 The CGN (Compagnie générale de navigation) reported on Tuesday that it carried more passengers in August than ever before (over 388,800), while establishing new highs for a single day and for the month of July.

The record for August eclipsed one set in 2009 when more than 354,000 passengers travelled on the lake boats in that month.

With its fleet of historic paddle steamers, the operator said it carried more than 1,588,000 passengers in the first eight months of the year, 11 percent more than in the same period for 2011.

“The CGN recorded the most beautiful summer in its history,” the company said in a news release.

It acknowledged the aid from a promotion by the UBS bank, which distributed thousands of coupons to its customers allowing them to travel on CGN boats all day for five francs.

The coupons, valid for boat excursions on more than a dozen other Swiss lakes, plus the Rhine River in Basel, were issued in conjunction with the bank’s 150th anniversary.

“The special promotion proposed this year in partnership with UBS contributed largely to these good results,” Terry Guillaume, CGN spokesman, was quoted as saying by the ATS news service.

Straddling the Swiss-French border, Lake Geneva is the largest lake in the Alps with a surface area of 580 square kilometres.

The CGN operates vessels that sail from Geneva at the western end to Villeneuve, 75 kilometres away at the eastern extremity in the canton of Vaud.