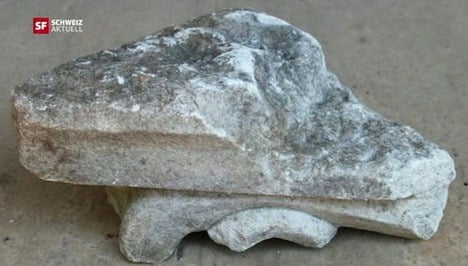 Varone, highly regarded as an honest and efficient police commander, was arrested by Turkish authorities after spending a holiday in Turkey.

The 11-centimetre stone was found in his baggage at Antalya airport as he was preparing to leave the country on July 27th.

He was held in custody in the Mediterranean city for five days before returning to Switzerland.

But according to a document revealed by the programme “Forum”, the Turkish prosecutor handling the matter believes he has a solid case against Varone.

“It is established that the suspect (Varone) arrested at the airport (in Turkey) while attempting to export a cultural artefact […] violated article 68/1 of the law 2863 for the protection of cultural and natural artefacts,” the Turkish document states.

The prosecutor requested that the accused be “judged […] and sentenced in light of the articles mentioned”.

The court case against Varone is scheduled to start on September 25th.

Varone has said that he did not intend to surreptitiously remove an archaeological artefact when his family picked up the stone near a historic site.

A photo of the alleged artefact, taken by a Turkish-Swiss journalist, has been shown on Swiss TV, although the police chief said he could not verify if it is the one he took.

Whatever the outcome of the court case, the incident has been described as a “Greek tragedy” for the policeman, who was said to have political ambitions.

Varone was favoured as a candidate for the Liberal-Radical Party to become a cabinet minister in the Valais cantonal government.

But the Turkish case appears to have scotched that scenario and now raises the possibility that he will have to resign as cantonal police chief.