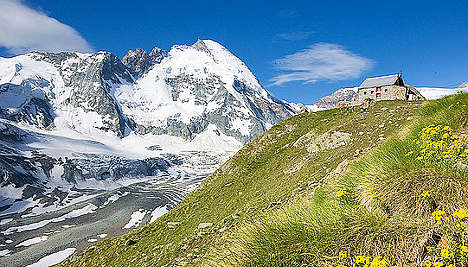 The man was climbing with three other colleagues at an altitude of 3,400 metres when he slipped and fell 200 metres, Valais cantonal police said.

The incident occurred at 1.30pm as the climbers headed for a hut on the Dame Blanche mountain after leaving the Schönbiel hut (altitude 2,694 metres) in the morning, police said.

The climbers were not roped together at the time.

The man’s colleagues immediately contacted emergency rescue services but a doctor transported to the scene by an Air Zermatt helicopter pronounced him dead, police said.

An investigation has been launched into the circumstances of the fall.

Just half an hour earlier on Sunday a 65-year-old German paraglider was killed in the mountain region above the village of Fiesch.

For reasons not immediately known, the man struck a rocky ridge in the Sidelhorn region near the village of Obergesteln in the eastern part of Valais, police said.

The victim died at the site of accident.

On Saturday, hikers discovered the body of a woman who died after falling 130 metres in the Lourtier region, southeast of Verbier.

Police said the woman was headed to the Prafleuri mountain hut, taking a trail by the Termin Pass, where it appears she slipped on a snow-covered area.

An investigation was launched into the accident and to determine the identity of the woman, who was travelling alone, police said.

Meanwhile, investigators are still looking into an accident that killed a 78-year-old Valais man in Zermatt last Thursday.

The man was fatally injured in the head after being struck by a cable car at a mid-station of the Furi lift, police said.

The man, a resident of the Zermatt area, had entered a cordoned off zone that was closed to the public.

He was taken by Air Zermatt helicopter to Bern hospital, where he died from his injuries on Thursday night.