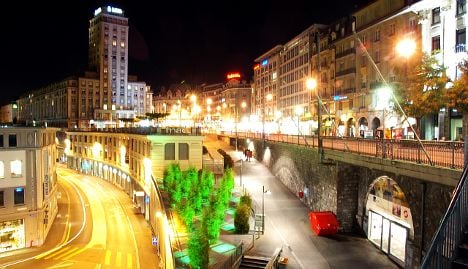 Grégoire Junod, a Socialist member of the seven-person municipal council executive previously in charge of culture, took over the reins on Tuesday, promising “firmness and pragmatism”.

The shuffle was announced after the previous councillor in charge of police, Marc Vuilleumier, announced that after just a year on the job he would no longer stay in charge of the department.

The position became a “hot potato” after Vuilleumier, a member of the left-wing POP, said he was fed up with criticism he faced over policing in the Vaud capital.

He charged that if someone felt they could do better he welcomed them to take on the job.

Vuilleumier was criticized in the Lausanne press for being capricious, given that he refused to give up his other responsibilities, including emergency services and sport.

He also signalled his decision on a weekend marred by fights and the arrest of 17 people outside Lausanne’s ice rink following a dispute between fans of the Lausanne and Fribourg hockey teams.

Right-wing politicians had needled Vuilleumier for being too soft on crime amid growing safety problems on the city’s streets.

And the mayor, Green Party member Daniel Brélaz, expressed his frustration over the open drugs scene in the city after having promised in July to rid Lausanne of dealers by 2012 “or by 2014 at the latest”.

Vuilleumier told La Liberté newspaper that he would like to see the dealers disappear too, but “it’s not realistic” to think this can happen in a year or two.

“No-one can make policies by decree.”

The issue threatened to fracture the left-wing and green party coalition that runs the municipal executive.

Fences seemed to be in the process of being mended on Tuesday, with Brélaz apologizing for the comments about drug dealers he said were “in hindsight, unfortunate,” 24heures reported.

The newspaper said Junod takes over an “explosive file” of issues, including a deteriorating security problem in Lausanne and problems with youth drinking.

The politician vowed to bring changes.

“It is not normal that children can no longer play in La Brouette Park,” he said, referring to one of the city’s hotspots for crime.

“Or that a woman can no longer walk alone at 10 pm along the Rue de Borg.”

As part of the shuffle, meanwhile, Vuilleumier will take on new duties, including responsibilities for labour, migration and social insurance.