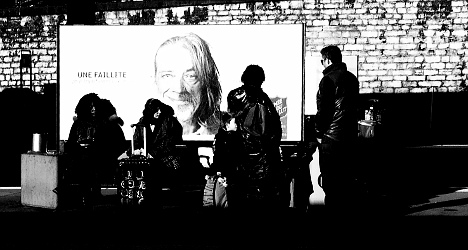 A Salvation Army billboard at Neuchâtel railway station warns of the perils of bankruptcy (Photo: Schnäggli)

The Credit Reform association said it expects such bankruptcies will rise to a record high of 6,527 for 2012, up 13 percent from the previous year.

“Up to the end of August we have already reported 4,351 personal bankruptcies,” Credit Reform director Claude Federer told SonntagsBlick, the German-language Sunday newspaper.

The trend has been intensifying over the past decade with personal bankruptcies in Switzerland around double what they were in 2002.

People in such situations get themselves into financial situations that cannot be turned around, even after consulting experts, said Jürg Gschwend, head of  debt consulting for the Caritas Switzerland organization.

“A (financial) reorganization is only possible with a minority of people advised,” Gschwend told SonntagsBlick.

The most commonly cited reasons for running deeply in the red are unemployment, starting a family, illness, separation and divorce.

Money problems can initially lead people to be unable to pay taxes and high insurance premiums.

Experts see no change in the situation.

“There is no turnaround in sight,” Noémie Zurn, of the Swiss federation of debt counselling, told SonntagsBlick.

“Our counselling services are used to full capacity.”

Zurn was critical of “aggressive advertising of consumer goods,” which can contribute to people spending beyond their means.

But also, “life on the never-never has become socially acceptable”.