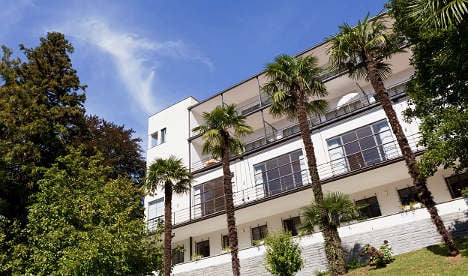 The Monte Verità hotel, in the Ticino city of Ascona, was awarded the honour by a jury including members from Switzerland Tourism, the Swiss hotel association, GastroSuisse and the Swiss section of ICOMOS, the international council of monuments and sites.

The flat-roofed hotel, built in 1927, was designed by Emil Fahrenkamp, a German architect and professor known for his Bauhaus designs.

The building is located on the Monte Verità (“hill of truth” in Italian), a 350-metre high hill that has served as the site of Utopian groups and cultural activities stretching back to the 12th century.

The hotel was founded by idealistic naturalists, pacifists and vegetarians, while the property was owned for 38 years by Baron Eduard von der Heydt, who died in 1964.

The site is now owned by the canton of Ticino.

The jury praised a restoration of the hotel carried out in 2007, which has allowed the “structure and the colours of the hallways and the rooms to live again”.

The annual award aims to promote the “conservation and care of historic buildings with national heritage principles”.

The Monte Verità is also the site of the ETH Zurich conference facility, a museum and a restaurant.

The Hotel Ofenhorn in the Binn valley was awarded the jury's Special Prize for the "detailed research into an important Alpine hotel and the ongoing restoration of the building by a committed group of people."

Constructed in the late 19th century, the hotel fell into serious disrepair in the 1980s until a local heritage group began the work of restoring it to its former glory.