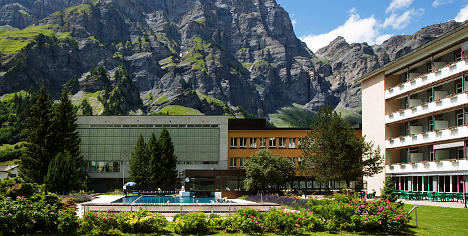 The rehabilitation clinic where the rescue took place (Photo: RZL.ch)

The incident occurred at a rehabilitation clinic, where the woman from the Bernese Jura, identified as Corinne, was undergoing therapy, LeMatin.ch reports.

The news website, which splashed the story on Wednesday, said Corinne has used a wheelchair ever since she was seriously injured in a car accident in 2005.

But on Sunday afternoon she was able to jump out of the chair and save the life of an Italian man in his 70s, a resident of the canton of Valais, who had a heart attack while swimming in the pool.

Corinne recalled that she was in the clinic’s cafeteria when she heard the man’s cries from the outdoor pool, about 50 metres away.

She managed to get out of the wheelchair and run across to the pool, passing through a rose bush en route.

“I don’t know how, or why, but I lifted myself out of the chair,” she told LeMatin.ch.

“It was instinctive — I was able to give him aid.”

The person responsible for the pool was in the toilets at the time, but upon his return he was able to lift the Italian out of the water with the help of a waitress from the clinic’s restaurant.

Corinne arrived at poolside at the same time.

Remembering tips from a first aid course taken 30 years earlier, Corinne told the waitress to give the man a cardiac massage while she performed mouth-to-mouth resuscitation.

“A nurse told me if he is still living it is thanks to her (Corinne),” Raymonde Bonvin, director of care at the clinic, told LeMatin.ch.