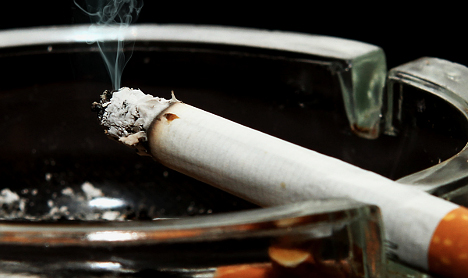 Sitting on the terrace of a Geneva cafe, enjoying a smoke in the early autumn sun, court clerk Isabelle Calapez told AFP she was "totally opposed" to
the expanded ban.

And she is not alone.

While opinion polls long showed majority support for the expanded ban, which would send several significant exceptions up in smoke, the latest survey, published last week, showed 52 percent of those questioned opposed the initiative against 41 percent in favour and seven percent undecided.

To outsiders, the issue may seem a bit confusing: Switzerland introduced a federal ban on smoking in indoor workplaces and public spaces more than two years ago.

However, that ban allows for a number of exceptions and has been applied unevenly in Switzerland's 26 cantons.

While eight cantons, including Geneva, already have a total ban on indoor smoking in places of employment, like restaurants and bars, and public spaces, like hospitals, the remaining 18 cantons apply the law less restrictively.

"Sunday, September 23rd, the Swiss will vote to standardize across Switzerland what is already the norm in eight cantons: a total protection against second-hand smoke in closed environments," Jean-Charles Rielle, a physician and a member of the committee behind the proposal, told AFP.

The Swiss Pulmonary League launched the initiative mainly to clear up all the confusion, he said, insisting it was not opposed to outdoor smoking or smoking in private spaces.

Supporters of the beefed-up ban also point to the health benefits of a yes vote on Sunday.

Working an eight-hour shift in a smoke-filled establishment is equivalent to smoking between 15 and 38 cigarettes, the proposal's supporters say, pointing to a World Health Organization study revealing that second-hand smoke kills upward of 600,000 people every year.

"In the cantons where these laws (banning smoking rooms) are already in effect, we saw immediately … a quick 20-percent drop in hospitalisation due to cardiovascular incidents, heart attacks and these kinds of problems," Rielle said.

But some businesses feel "any additional attempt" to push through tougher smoking laws "is a witch-hunt, a hygienism pushed to extremes", according to Laurent Terlinchamp, president of Geneva's association of cafe owners, restaurateurs and hoteliers.

"In Geneva, where the law came in two years ago, we were told that a new clientele would start to come back to establishments," he said. "But it's not the case today because profits are down 10 percent to 30 percent depending on the type of business."

Whatever the outcome of Sunday's vote, some smokers have found a solution to the current restrictions by joining members-only bars where there are no restrictions on lighting up.

The idea has caught on in Basel, Zurich and also Geneva, where the newly formed Speakeasy association asks a 450 franc membership fee.