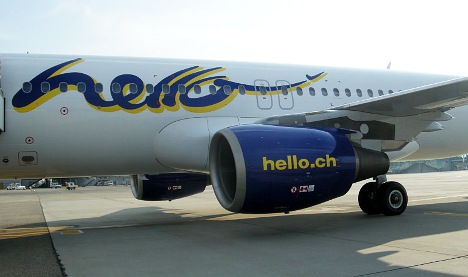 The practice, slammed by Aeropers, the Swiss Air Line Pilots Association, is revealed in a report by the Zurich-based newspaper Tages Anzeiger.

Pilots with a licence to fly typically need further training on specific types of aircraft, the newspaper reports.

“We need in the peak of the summer season additional co-pilots and they need hours of flight on the A320,” Bob Somers, the Irish expat CEO of Hello told Tages Anzeiger, referring to the Airbus plane.

The pilots are paid only expenses during the training period, the newspaper says.

It adds that pilots even pay for the opportunity to gain flying time with some European airlines, which are under pressure to cut costs.

Aeropers spokesman Thomas Steffen said, whether pilots pay or work for free to gain experience, the union views such practices as “reprehensible”.

Airlines are exploiting the plight of young pilots and abusing them, Steffen told Tages Anzeiger.

"We doubt that these companies choose their pilots with sufficient care to ensure that they have the ability to securely handle the flights," said Steffen.

“The sole condition of employment was in these cases probably the question of whether the pilot could not pay for his flying lessons,” he said.

"This is not conducive to flight safety and cannot be in the interests of passengers.”

Tages Anzeiger quotes the chief pilot of Edelweiss Air, Christoph Zogg, as saying that his airline has the authorization to charge young pilots for training but has not elected to do so.

Such “pay programmes” are common elsewhere in Europe, particularly in Turkey, he said.

"We always have candidates who have completed (such a) programme there."