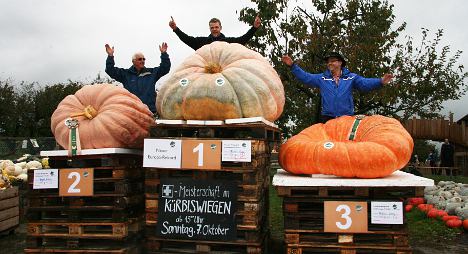 The monster vegetable cultivated by Beni Meier weighed in at 768.5 kilograms on Sunday at a competition held in Seegräben, in the same canton.

Heavier than a Smart car, the giant pumpkin is on track to set a new European record, currently held by Mehdi Dao, from France, for a 730-kilogram specimen.

Meier will be taking his pumpkin to Ludwigsburg, Germany for the 2012 European pumpkin championships on October 14th.

The member of a family that runs a nursery, Meier grew the biggest Swiss pumpkin last year with one that weighed 702 kilograms.

Jucker Farmart, operator of a garden market centre and organizer of the Swiss competition, has already proclaimed Meier’s pumpkin as a European champion.

A parade of the biggest Swiss pumpkins grown by nine finalists was held in Seegräben, where the biggest ones (except for Meier’s) will be displayed until November 4th.

The top five were all more than a metre in diameter, according to organizers.

As big as Meier’s pumpkin is, it falls well short of the world record held by American grower Ron Wallace, who grew one that tipped the scales at 911 kilograms last week at the Topsfield agricultural fair in Massachusetts.