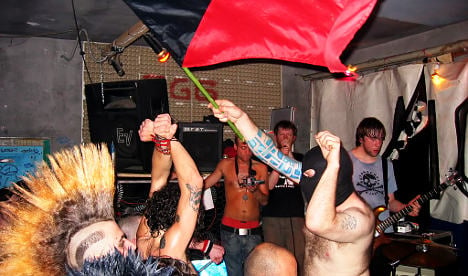 On the advice of police, the municipal council on Thursday approved the ban on Oi Polloi, who were scheduled to perform on Saturday, October 20th at the 11th annual Lausanne Underground Film and Music Festival.

The band, founded in Scotland around 1981, has been associated with the “anarcho-punk” genre and uses the motto “No compromise in the defence of our earth” in support of radical environmentalism.

Lausanne police wanted to avoid a repeat of a violent clash between young fans and police during an anarcho-punk concert in 2010, which brought criticism from concert organizers of a “heavy-handed” response from law enforcement officials.

A number of punk rock fans are reportedly unhappy with the concert cancellation.

Two “punk types” threw a cream pie in the face of Grégoire Junod, the Socialist councillor in charge of security on Thursday at around 7.30pm, the website of the 20 Minutes newspaper reported.

It is not clear if the attack was directly related to the concert cancellation.

The incident occurred following a demonstration in the city centre over the high cost of housing in Lausanne.

Running from October 17th to 21st, the underground film and music festival is honouring American filmmaker and comedian John Waters, famous for quirky cult movies such as Hairspray (1988).

“This Filthy World,”  an English-language documentary on Waters’ work will be screened along with a selection of his films.