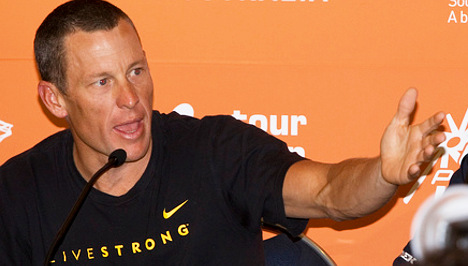 The International Cycling Union (UCI) said it supported a decision by the US Anti-Doping Agency (USADA) to erase the Texan's career and his place in the sport's history.

"We will not appeal to the Court of Arbitration for Sport and we will recognize the sanction that USADA has imposed," UCI president Pat McQuaid told a news conference.

"The UCI will strip him of his seven Tour de France wins. Lance Armstrong has no place in cycling."

Earlier this month the US body released a devastating dossier on Armstrong, detailing over 202 pages and with more than 1,000 pages of supporting testimony how he was at the heart of the biggest doping programme in the history of sport.

The revelations, including evidence from 11 of Armstrong's former team-mates, plunged a sport which has been working hard to rid itself of its murky doping past into crisis.

McQuaid succeeded Hein Verbruggen as president of world cycling after Armstrong's seventh and final Tour victory in 2005 and is credited with boosting the body's anti-doping programme, notably with the pioneering blood passport programme.

The Irishman was under pressure to answer how Armstrong and his teams managed to dope for so long without being detected. But he rejected calls to quit.

Armstrong's sporting reputation as the cancer survivor who fought back to win cycling's most gruelling and celebrated race has been shattered since the revelations, leading to sponsors leaving him in droves.

There has also been fears of a wider withdrawal of financial backing for the sport after Dutch sponsor Rabobank said it was ending the sponsorship of its professional cycling team after a 17-year association.

The sponsor described professional cycling as "sick" to its core and unlikely to recover in the foreseeable future.

The strongly-worded comments went to the heart of claims of failings at the UCI and in particular to McQuaid, who has been criticized for failing to see the extent of doping within the sport.

Verbruggen, who stepped down in in 2006 but remains honorary president, ran the UCI during Armstrong's golden era — a time when USADA's report says Armstrong and team-mates evaded dope tests either by hiding or being tipped off in advance.

The Dutchman has also been accused of protecting Armstrong — even accepting a donation to cover up a positive dope test.

The cyclist's cancer backstory and Tour triumphs from 1999 to 2005 were seen as key to restoring cycling's tattered image after a string of high-profile doping scandals in the 1990s.

Armstrong's Tour victories are unlikely to be re-awarded, the race's director Christian Prudhomme has said. The void avoids further headaches, given that the majority of riders who finished on the podium have also been implicated in doping.

On the eve of the UCI decision, Armstrong spoke for about 90 seconds to a record 4,300 bikers at the Livestrong Challenge charity benefit, a 100-mile (160-kilometre) race in his hometown of Austin, Texas.

"I've been better, but I've also been worse," Armstrong told the riders.

"Obviously it has been an interesting and difficult couple of weeks."

Since the USADA report, sponsors have fled Armstrong and he was forced to resign as chairman of the Livestrong cancer-fighting charity he founded in 1997 over concerns his tarnished reputation could hurt the cause.

Armstrong, who overcame testicular cancer that had spread to his brain and lungs to achieve cycling stardom, inspired more than $500 million in donations to Livestrong and pushed other cancer survivors to battle the condition.

No criminal charges were filed against Armstrong from an 18-month US federal probe that ended earlier this year and evidence from that case was not given to USADA.

But Armstrong could yet face court cases from former sponsors who accepted his assurances that his legacy was not aided by banned substances.