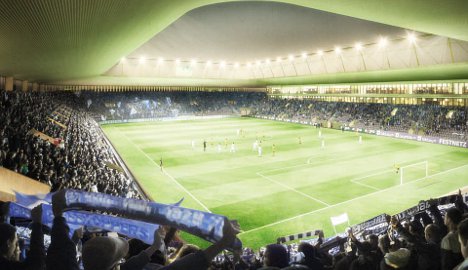 City of Zurich officials on Wednesday unveiled the blueprint for a modest stadium designed to serve as the new home of the Zurich FC and Grasshopper teams.

The proposed building, to be built in Zurich West, would offer an intimate setting for watching football, with a capacity of 19,500 spectators, including 6,600 standing room spaces.

For international games requiring all viewers to be seated, the capacity would only be 16,000.

Fifteen corporate boxes, 500 business seats, 500 seats for sponsors and 18 food stands are among the other features.

Gerold Lauber, Zurich’s councillor responsible for sports, told a press conference the stadium would be criticized for being too small but he defended it as a “fair size” that would create a good atmosphere for matches.

The latest plan follows previous unsuccessful efforts to build a replacement for Zurich’s Hardturm stadium, which closed in 2007.

A proposal for a 30,000-seat stadium with a budget of 350 million francs, with planned financing from Credit Suisse, was dogged by legal issues.

With a capacity of 25,000 spectators for football, it opened in 2007 but it is viewed as a less than ideal venue for the sport.

If voters approve the new stadium in Zurich West, officials say it would open in July 2017 — if all goes according to plan.