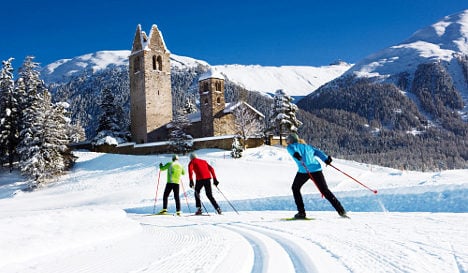 "The strength of the Swiss franc over the euro has caused a near nine-percent-drop in European tourist numbers" to Switzerland during the first seven months of this year, said Federico Sommaruga, who heads the emerging markets unit at Switzerland Tourism, the national tourist board.

The Swiss currency gained 11 percent against the euro in the first nine months last year, forcing the Swiss central bank to intervene with a pledge to buy unlimited amounts of the European common currency to ensure one euro would buy a minimum of 1.20 Swiss francs.

But despite the strictly enforced floor, Europeans still view Switzerland as an expensive, luxury destination that few can afford in a time of crisis.

In August alone this year, bookings by European visitors slumped 9.5 percent, with an 18-percent-drop in Dutch guests, according to the Swiss Hotel Association

To entice visitors back, rail operator SBB recently launched a 15-day offer for unlimited travel throughout Switzerland — also including boats and buses — for 199 francs (164 euros, $215).

Initially aiming to snag 20,000 customers before the offer runs out in November, the rail operator says it has already sold 60,000 "Holiday Passports" since the launch only weeks ago.

Another initiative requires more of holidaymakers than catching a train.

"Holidays don't just have to be about getting a suntan. You can also do a little sport," said Ruedi Jaisli, founder of SwissTrails, one of the new generation of tour operators offering mountain-bike excursions, electric-bike tours, roller blading, canoeing and hiking.

"It's a very popular formula with families, we go to pick them up at the train station or airport, we take their bags to their various stop-off points during their stay," added Jaisli.

So far this year, some 5,000 people have travelled in Switzerland with SwissTrails, spending on average six days in the country.

Among the options, guests can stay at rural farms and guesthouses, and if they're feeling lonely can opt to sleep on a bed of hay big enough for up to ten people.

At the "Corn Hotel" in Soleure canton, in the centre-west of the country, visitors can sleep in a comfortable bed placed right in the middle of an immense corn field with a simple canopy for shelter.

But with autumn fast drawing to a close, many tour operators are preparing to tighten their belts.

Many ski resorts meanwhile have announced a freeze on ski-pass prices, conscious of the expected drop in bookings from many crisis-hit European countries.

According to the Swiss weekly Der Sonntag, more than half of resorts contacted said their ski-pass prices were unchanged, whereas last year 80 percent of them announced price increases.

Several resorts even announced price cuts for a day on the slopes, including Saas-Fee, in the southern Valais canton, and Engelberg-Brunni, in central Switzerland.

"We are preparing for another difficult winter, thanks to the strong Swiss franc," said Andreas Keller, spokesman for Swiss mountain lift company SBS.

"We struggled last year because of the strong franc, and because of several days of storms which affected the new year celebrations," he added.

But not all resorts are as badly hit.

Those with a loyal Swiss following and which are close to towns have sidestepped the downturn.

But big resorts such as Zermatt, in the canton of Valais, and St Moritz in Grisons, often the preserve of well-heeled jet-setters — have come down to earth with a bump.

To soften the landing, hotels in these resorts now offer sweeteners for guests: anyone booking in for at least two nights in in the Engadine region, for instance, is entitled to a ski pass for around 25 francs a day, a fraction of the usual rate.

And in the Arosa ski resort, ski school lessons are free for children up to 12 years old, in an attempt to combat the growing number turning away from the sport.