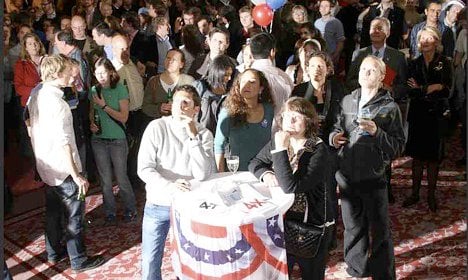 Incumbent President Barack Obama from the Democrats is neck-and-neck with Republican challenger Mitt Romney in a race that will not be decided before early Wednesday morning Swiss time.

But organizers of soirees in Swiss cities are not letting a little thing like a difference in time zones interfere with a good get-together.

The biggest parties in the country are planned for Geneva, where the American International Club (AIC) is hosting what it is calling the “only free and non-partisan” presidential election night party in the city.

The club has rented the ballroom at the Crowne Plaza Hotel, where a jazz band will be playing until 1am and results will be shown on giant TV screens.

Representatives of the Democratic and Republican parties will have tables at the event, along with members of the American Citizens’ Abroad organization, she said.

The AIC election night party is a tradition dating back to 1980 and it attracts a lot of non-Americans too, Strömstad said.

“A lot of different people come because (the outcome) will have a big impact on the world,” she said.

Strömstad expects the verdict won’t be known until well into the morning.

“Normally we expect the results at 3am but that depends on the swing states.”

The AIC is putting on a three-course election night dinner for those willing to cough up 150 francs (130 francs for club members with registration in advance).

And for those with the stamina, an election results breakfast debate is scheduled for 8am on Wednesday.

Organized with aid from the US Mission to the UN in Geneva, the debate will involve a digital video conference with Tom Schaller, associate professor of political science at the University of Maryland.

Schaller will offer his analysis of the results and respond to questions, Strömstad said.

Not to be outdone, Democrats Abroad Switzerland is holding its own party in a theatre complex at 2 Rue de la Servette.

Tickets at 60 francs were still being sold on Monday for what is billed as a “Switzerland for Obama 2012” election night party.

Samara said she expected most of the attendees at the event, which offers one free drink per person and “all night food”, will stay until the final results are known.

“I would hope it will be over when Ohio closes,” she said, referring to one of the crucial states for Obama to win.

Democrats Abroad are also involved in a soiree organized in Zurich by the Swiss Socialist Party at the Gemeinschaftszentrum Riesbach, 93 Seefeldstrasse.

The free event promises a lineup of speakers, including author and screenwriter Charles Lewinsky, and a round table political discussion with a panel of experts, including MPs Martin Naef (Socialist)  and Felix Gutzwiller (Liberal) .

Swiss residents are taking a great deal of interest in the American election.

In Lausanne, the association of political science alumni from the University of Lausanne (ASOPOLI) is holding an election night event at the Café Théâtre Le Bourg in the Vaud capital.

The association will be showing results from CNN and Swiss broadcaster RTS into the wee hours at the theatre at 51 Rue de Bourg.