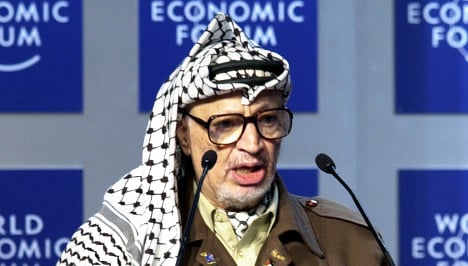 The team, along with French investigators, is expected to participate in Arafat's exhumation on November 26th, as part of a new investigation into the circumstances of the late leader's 2004 death.

The delegation from the Institute of Radiation Physics at Switzerland's University of Lausanne arrived on Monday, Palestinian sources said, adding that they met with Palestinian health minister Hani Abdeen and justice minister Ali Mhanna.

The team also held talks with Tawfiq Tirawi, head of the Palestinian commission that investigated Arafat's death, "to discuss next steps" and visited the Ramallah mausoleum that houses Arafat's grave.

Arafat died in a French military hospital near Paris on November 11th, 2004 and French experts were unable to say what had killed him, with many Palestinians convinced he was poisoned by Israel.

French prosecutors opened a murder inquiry into his death in August after Al-Jazeera television broadcast an investigation in which Swiss experts said they had found high levels of radioactive polonium on Arafat's personal effects.

Polonium is a highly toxic substance rarely found outside military and scientific circles.

It was used to kill former Russian spy turned Kremlin critic Alexander Litvinenko, who died in 2006 in London shortly after drinking tea laced with the poison.

Last month, Palestinian sources told AFP that French investigators and a team from the Swiss lab would exhume Arafat's body on November 26th.

"The Palestinian Authority will provide these teams with every facility in order to determine the circumstances of the death of president Yasser Arafat," the source said.