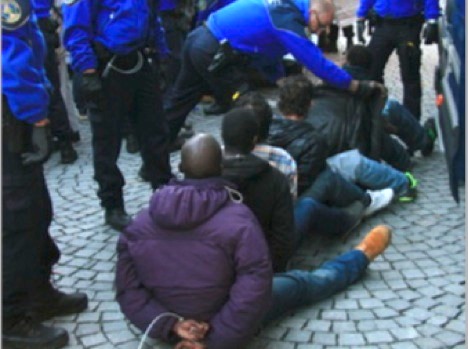 In a joint operation, a contingent of around 150 officers arrived at the Place Chauderon late on Wednesday afternoon, checking about 50 people hanging out in the area.

The square is known as a place where drug dealers have been carrying out their illegal activity in an increasingly open manner, sparking general concern about security in the neighborhood.

A prosecutor for the city district was also on hand to follow up on legal charges.

No details of arrests and charges were immediately available.

Police said the coordinated operation, the third of it kind by the two forces, aimed to “destabilize” the mileu of drug dealing that has become a major law enforcement challenge in the Vaud capital.

Police promised to reinforce their presence and visibility in the city’s downtown area.

City officers will be patrolling the Place Chauderon on a daily basis and during the evenings with a goal of reducing unsociable behaviour and activity that degrades the quality of life in the area.

In addition, two private security guards have been hired to guard buildings at the south end of the square six days a week, police said.

The city force, which has faced criticism for not taking enough action to deal with street dealers, said it would be conducting similar targeted operations in different areas of the city.

“The police will remain attentive to any changes in the behaviour of street dealers in response to the carrying out of such measures.”