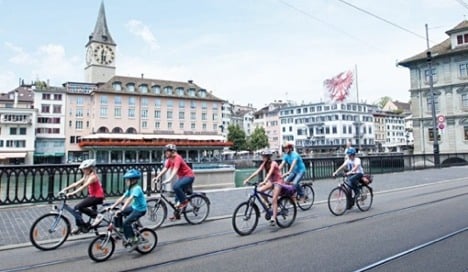 City officials announced the “velo master plan” on Thursday, noting that the number of bicycle riders is expected to double in Switzerland’s largest metropolitan area by 2025.

Three new jobs are being created in the municipal engineering department to roll out the plan, which calls for more lanes and improved infrastructure such as parking for bikes.

Part of the plan involves widening existing lanes on main routes to 1.8 metres to improve the feeling of security for cyclists and to reduce the risk of accidents.

Trees will be removed, along with 1,000 public parking spaces (out of 67,000), while some pedestrian areas will be impacted to accommodate the extra bike paths.

The canton is picking up half the tab for the plan, while an additional 12 million francs will be spent to implement the goals.

The city says that two out three Zurich residents own a bike but only a third use one regularly.

Officials want to encourage people to cycle for short trips instead of driving.

Umverkehr, a group that supports sustainable mobility, said the city plan is a positive step.

But the group’s director Thomas Stahel told Tages Anzeiger while the plan sounds promising on paper, the city has failed to deliver on a previous commitment from a few years ago to significantly boost the share of cycling traffic.

“Since then, little has happened,” Stahel said.

He noted that it is not clear actually how many new bike lanes will be created.

Stahel said another missing element is that Zurich, unlike many other European cities does not have a city-wide bike rental system, which would encourage more bike use.

Meanwhile, others were upset with the bike plan, according to Blick.ch, which said 61 percent of its readers were against the project.

Many were upset with the impact the plan will have on parking and reducing lanes for driving, the website reported.