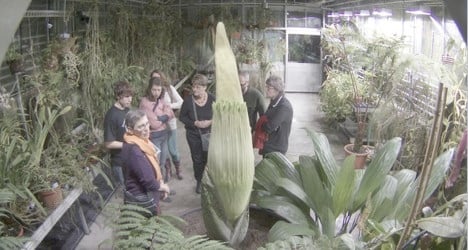 In full blossom the plant’s flower, on display at the university’s botanical garden, can shoot up to two metres in height.

On Sunday the bloom was already 1.56 metres high, repeating a flowering that occurred a year and a half ago.

Botanical garden officials expect it to reach its highest point at the end of this week, according to a report from the ATS news service.

Officials said it is rare for the plant to flower for a second time so soon afterwards.

Even in the wild, the plant rarely flowers and under cultivation is even more uncommon.

By the beginning of this year only 134 flowering events of titan arums had been registered in botanical gardens around the world.

The plant is native to the tropical forest of Sumatra in Indonesia.

The hot and humid climate of the island is difficult to reproduce in Switzerland and the plant readily attracts parasites.

The scientific name of the plant is amorphophallis titanum, from the ancient Greek, meaning literally “giant, misshapen phallus”.

While its flower is regarded as beautiful, the plant gives off an unpleasant odour reminiscent of rotten meat.

It is sometimes called a “corpse flower”.

None of this has put off visitors to the botanical garden, who are intrigued by its unusual characteristics.

A total of 25,000 visitors came to the Basel botanical garden to check out the plant when it flowered in 2011.

The garden has installed a web camera to observe the flower’s growth, which began accelerating on Friday.