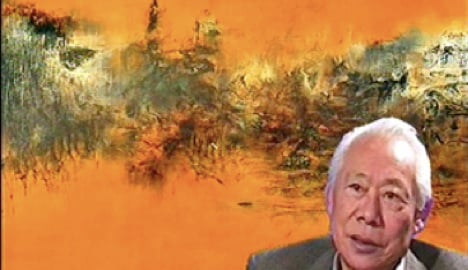 The artist in front of one of his works (Photo/Screenshot: Pantalaskas)

At the heart of a battle ripping the family apart lies the contested ownership of eight works worth millions of dollars.

The son, Jia-Ling Zhao, believes that Zao, who is 91 and has suffered from Alzheimer's disease since at least 2005, was moved to Switzerland in 2011 against his will.

The Beijing-born artist left China for Paris before the Communist Party took over the country and has been a French citizen since 1964.

"Zao had been in France since 1948, he is very attached to the country and never expressed any desire to leave it," said his son's lawyer, Jean-Philippe Hugot.

His wife, Francoise Marquet, a former curator of the Museum of Modern Art in Paris now based in the Lake Geneva region, stands to inherit a greater part of the artist's estate than she would have done had they stayed in France.

She asserts that Switzerland offers the best environment for his health and for preserving his assets, both financial and artistic.

Marquet has created a foundation in Switzerland to promote her husband's work, prompting protests from the son that both he and his father are now excluded from the management of his collection.

"Zao Wou-Ki is doing well, the move to Switzerland has been beneficial for him," Pierre Genon-Catalot, the lawyer for Marquet insisted.

"He is much better physically."

Zao's son, however, is not convinced and he has pursued legal action on two fronts.

A request to a Paris court for him to be granted power of attorney over his father's affairs was rejected after the judge ruled that he could not rule on the decision since Zao was now resident in Switzerland.

The son is appealing that ruling and a decision is due on December 4th.

In parallel with that request, Jia-Ling Zhao has since May been pursuing his mother-in-law for allegedly abusing a person weakened by illness and has secured the opening of a preliminary investigation by the French authorities.

Marquet, meanwhile, has, through the Swiss courts, secured joint power of attorney over her husband and his estate along with a Swiss national, Marc Bonnant.

That decision, which has enabled Marquet to sell some of her husband's works, is being challenged by the son, who is seeking to be legally recognised as jointly responsible for his father.

He also accuses his mother-in-law of having moved eight paintings that have belonged to him since Zao divorced his mother in 1958.

"He has made that claim knowing that Zao can no longer respond to him."

He added that the artist had always lived by selling his works and that the most recent sales had been authorized by a Swiss judge.