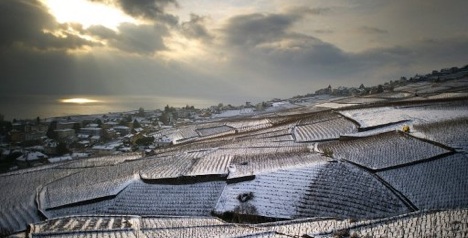 Lavaux vineyards, shown here under snow in January, are preparing for the white stuff, along with much of the rest of the country (Photo: Fabrice Coffrini/AFP/File)

MeteoSwiss, the national weather office, predicted slippery roads and five to 10 centimetres of snow in lowland areas from the Lake Geneva region to the eastern parts of the country bordering Lake Constance.

The county’s biggest city, Zurich, is among the communities preparing for a white-crystal coating.

The weather office issued level four red warnings of high danger in mountain areas close to the Italian border such as Alta Valmaggia in Ticino, where 100 to 140 centimetres of snow is expected.

Other mountain areas of Ticino and Valais are forecast to see 70 to 140 centimetres in the next day or so.

Avalanche warnings have been issued for many Alpine areas.

Forecasters, meanwhile, are calling for 10 to 30 centimetres of snow in Lausanne and the Lavaux vineyard areas close to Lake Geneva.

In one of the few areas to avoid snow, towns such as Porrentruy and Moutier in the Jura are preparing for 50 to 80 millimetres of rain.

Geneva, is expected to escape the white stuff, with precipitation falling as rain.

News of the snow expected to blanket much of the country ironically hit as the World Meteorological Organization, based in Switzerland’s westernmost city, issued a report on Wednesday about accelerating climate change.

The January-October period of 2012 was the ninth warmest such period since records first began to be kept in 1850, the WMO, said warning of climate change accompanied by extreme weather events.

Colder weather, with temperatures in the lowlands dipping well below zero in the lowlands, mixed with precipitation bring a chance of further snow through the weekend in many parts of Switzerland.

The snow is welcome news for Swiss ski resorts, some of which have already opened for business.

Saas-Fee in Valais is reporting 40 percent of its runs are open, while Zermatt has opened about a tenth of its pistes.

Saint Moritz in Graubünden has also opened up some of its lifts.

While some areas of Switzerland have been hit by thunderstorms in the past days, providing some relief for agriculture and nature in general, the amount of rain has not been sufficient to counteract the effects of drought that has impacted much of the country.

Continued drought has also impacted some rivers, including the Rhine, whose levels are “strongly to moderately” below average for the season, FOEN said.

The good news is that “the alarming situation on the drought front will finally ease somewhat in the coming days thanks to the return of the rains», according to Vincent Devantay, meteorologist at MeteoNews weather service.

The rains will begin on Wednesday afternoon, intensifying by the weekend, and “several areas of more or less active showers will finally follow one another until Saturday”, Devantay said.

By Saturday, these rainfall amounts are expected, according to MeteoNews:

“These rains will bring some relief from the drought, but it would take several weeks of almost daily rain to see a real and lasting improvement”, Devantay said.

The rain will also bring in “much cooler temperatures”, but the summer weather will make a comeback from Sunday, “with increasingly warm temperatures and no clear deterioration is in sight for the future”.