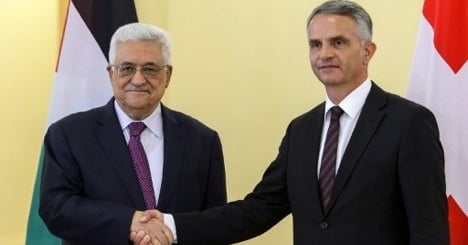 The Palestinian draft resolution to be voted on at the UN General Assembly on Thursday was "both constructive and pragmatic", the federal government said in a statement.

It said its decision chimed with Switzerland's policy to seek "a negotiated, just, and durable peace between Israel and an independent and
viable Palestinian state within secure and internationally recognised borders".

France on Tuesday became the first major European nation to say it would back the Palestinian bid to upgrade its United Nations status to that of a non-member observer state.

The proposal is set to sail through as it has the backing of the majority of the UN's 193 member states, although it is opposed by the United States, Israel's strongest ally.

A positive vote will improve the chances of the Palestinians joining the International Criminal Court and UN agencies, while Bern said it would also place "Israel and Palestine on an equal footing in future peace negotiations".

The Palestinians want to launch legal action at The Hague-based ICC to challenge Israel's occupation of the West Bank.

But Switzerland cautioned that observer states had "not only rights but also obligations", such as refraining from the threat or use of force, as enshrined in the UN Charter.

Bern's decision follows a visit to Switzerland on November 15th  by Palestinian president Mahmud Abbas, who repeated his intention to relaunch the peace process after the UN vote, the Swiss statement said.