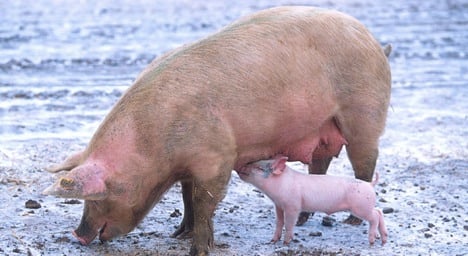 The office on Thursday said it had ordered the shutdown of the farms and the destruction of 62 sows after the discovery of blue-ear pig disease.

Switzerland was previously free of the pandemic disease, caused by a virus that leads to reproductive failure in breeding stock and respiratory tract disease in young pigs.

Experts have traced the appearance of the viral infection to semen imported for breeding purposes from Germany, where an outbreak of the virus was reported at the beginning of this week.

The FVO has ordered a lock-down of the pig farms that received the tainted semen.

The pigs inseminated with the semen were destroyed as a preventive measure, the office said.

Further tests are being conducted on other animals at the affected farms, with results not expected until next week.

Switzerland does not authorize vaccines against the blue-ear disease, which is regarded as one of the most serious and costly pig infections in the world.

First reported in 1987 in North America and Central Europe, it now costs the American pig industry an estimated $600 million annually.

The disease spreads through the air, but also via seeds and can be transmitted in the body of sows to unborn piglets, Swiss authorities said.

The infection is not dangerous to humans.