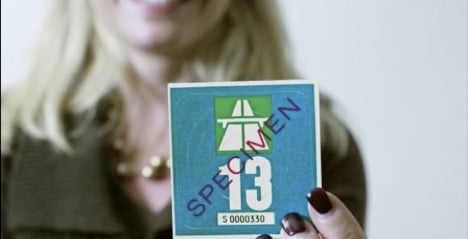 The future cost of the motorway "vignette" remains up in the air (Photo: admin.ch)

Earlier this year, the federal government and the senate both recommended the 100-franc fee, arguing it was needed to pay for highway expansion and maintenance.

Monday's decision was approved by a vote of 98 to 72, with right-wing parties opposing the move.

Vehicle operators using motorways in Switzerland are required to buy the sticker or “vignette”, valid for one year, even if they are passing through the country for the day.

The government called for a 40-franc vignette that would be valid for two months for motorists on a short stay in the country.

Now, the whole issue will be returned to the senate for further debate.

The decision is a blow for Transport Minister Doris Leuthard who had argued that if the cost of the vignette was not increased to 100 francs by around 2015, plans for 370 kilometres of new roads at an estimated cost of 2.4 billion francs would have to be scaled back.

Leuthard wanted the higher fee to kick in as soon as a special reserve fund for highways drops below one billion francs, which it is expected to do by 2015.

Left-wing and Green parties argued that a 70-franc vignette would be sufficient to pay for all the highway projects already planned for the next 20 years, as well as for maintenance, the ATS news service reported.