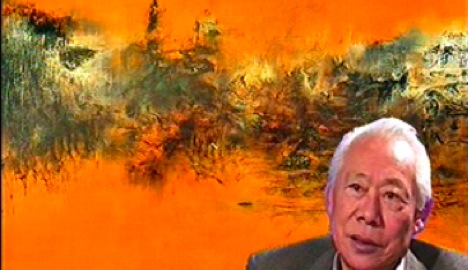 Zao Wou-ki in front of one of his works (Photo: Pantalaskas)

The Paris appeals court ruled last week that it is within the jurisdiction of French judges to rule on a case brought by the artist's son, overturning a previous ruling in May.

Zao, who is 92 and has suffered from Alzheimer's disease since at least 2005, is at the centre of a bitter legal battle between his third wife and his son from a previous marriage.

The son, Jia-Ling Zhao, is seeking to obtain power of attorney over his father in the French courts, claiming he was moved to Switzerland in 2011 against his will.

Zao's wife, Francoise Marquet, a former curator of the Museum of Modern Art in Paris, said she had moved the artist to Switzerland because the country offered the best environment for his health and for preserving his assets.

But Zhao asserts the move is based on his mother-in-law's efforts to control the artist's inheritance, including potentially millions of francs worth of works in his personal collection.

Through the Swiss courts, Marquet has secured joint power of attorney over her husband and his estate along with a Swiss national, Marc Bonnant.

Zhao has also filed a criminal complaint against his mother-in-law in France for allegedly abusing a person weakened by illness.

Police have opened a preliminary investigation.

The Beijing-born Zao, considered one of the greatest living Chinese artists, left China for Paris before the Communist Party took over the country and has been a French citizen since 1964.