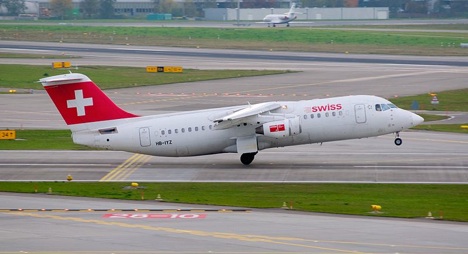 The four-engined Jumbolino aircraft was en route from London City to Geneva when it was forced to land after the engine failure.

The aircraft was carrying 96 passengers.

The cause of the engine failure was not immediately known.

Passengers were bused from Stansted to London’s Heathrow Airport where they were able to take another plane to Geneva, the Swiss spokesman said.

Swiss has 20 Jumbolino aircraft in its fleet.

The short take-off and landing planes, otherwise known as Avro RJ100s, were manufactured by BAE Systems in the UK.

With an average age of 14.3 years, they are the oldest aircraft in the Swiss fleet, according to the company’s figures.