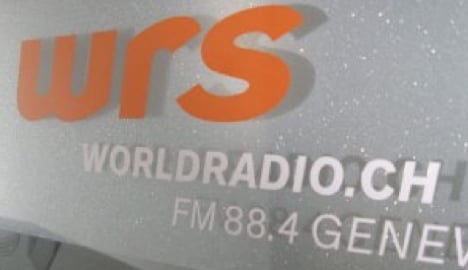 The state broadcaster’s executive board on Monday issued a statement confirming its plans to privatize WRS, although it said it would remain a part of the SRG SSR until 2014.

The board said it would consider a proposal by Philippe Mottaz, WRS’s current director, and Paige Revillard, the deputy director, to create a foundation to run the station.

The proponents of the WRS Foundation would apply for an FM licence in connection with their project, the board said.

The other bid under consideration is one made by Anglo Media, a company involving former WRS presenter Mark Butcher and entrepreneur Peter Sibley.

Anglo Media, which currently runs Radio Frontier, an Internet radio station in the Geneva area, is prepared to acquire WRS with or without an FM licence, the SSR said.

“The steering committee in charge of the project at SSR believes that both (bids) are excellent projects, particularly with a view to ensuring the WRS remit is fulfilled in the long term.”

SSR said it would brief Ofcom, Switzerland’s broadcast regulator, over the next few days.

“Ofcom will then notify Detec (the federal department of the environment, transport, energy and communication) of the decision that has been made,” the broadcaster said.

The statement was not clear on whether a final bid would be ultimately accepted.

“Detec will decide on the next steps to be taken and will begin the process for the award of a broadcast charter, if appropriate.”

WRS currently broadcasts with an FM licence covering the Geneva area and via DAB digital radio and the Internet in the rest of the country.

The board of directors of SRG SSR decided on June 27th to privatize WRS after receiving a report from management which stated that English-language radio was not part of the public broadcaster’s core mandate.

The radio station, with a staff of about 20, has a budget of around four million francs a year.

The SSR statement said the federal government will amend the Swiss Broadcasting Corporation’s charter to release it from its “obligation to broadcast English-language radio programming.”

It added that a transfer of WRS to the successful bidder is scheduled to take place in 2014 and no later than December 31st 2014.

Until the transfer is made, WRS “will remain a fully-fledged part of SSR’s offer”.

To find out more about what representatives of the two bidders have to say about their proposals, check out this report from the WRS website.