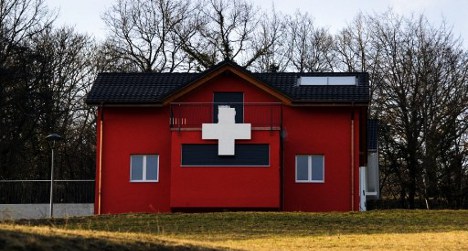 A house adorned with a white cross to resemble the Swiss flag is seen on March 11th 2012 in Moudon. Photo: Fabrice Coffrini/AFP

"I just didn't want to stay in Spain anymore. I was really afraid the whole country would go just go up in flames," the 41-year-old Spaniard told AFP, explaining why he had made his way to Switzerland last August.

While at the heart of a continent plunged in deep crisis, Switzerland is experiencing economic growth and enjoys a mere 3.1-percent unemployment rate, compared to 11.7 percent in the neighbouring eurozone.

"I thought Switzerland was not only a good country for finding work, but also for my kids and their future," said Perello, whose three- and five-year-old children are still in Spain with their mother waiting for him to find work before making the move.

Perello is not alone. According to Swiss statistics, there has been a recent surge in the number of southern Europeans, especially from Portugal and Spain, settling in the country.

Alberto Gomez, a 36-year-old salesman who moved to Switzerland in May after losing three jobs in Spain over the course of as many years, has a blog for new arrivals from his country that gets more than 1,000 hits a day.

"Everyone says they have come because of the crisis… All the young people want to leave Spain. There are no jobs and virtually no unemployment benefits," he told AFP.

And while soaring unemployment and slashed benefits have for several years been pushing private sector workers out of hard-hit countries, observers say public sectors that once offered prosperity and lifelong security have become increasingly affected.

"The migration of public sector employees is rising," Daniel Vaughn-Whitehead, an economist with the UN's International Labour Organization, told AFP.

"Before, public sector employees were well-protected and they had higher wages… They had life-long employment. Now that is not the case," he said.

In fact, "the picture emerging (in many European countries) is quite shocking," he said, describing how "austerity packages" have led to employment cuts and wage cuts across public sectors, including healthcare and education.

In a report in September, the ILO for instance mentioned the case of a 50-year-old Portugese woman, only identified as Ana B., who had taken one-year leave from a good job as a secretary at a government agency in Porto to work as a cleaning lady in Switzerland.

Although the shift was tough in terms of falling social status and comfort levels, she said she received more than double the pay, which allowed her to pay off bills back home.

"I would certainly rather stay at home," she confided, "but I want my son to be able to graduate from university."

Perello meanwhile is staying with a friend on the French side of the border as he looks for work in Switzerland, since "it is too expensive to live in Geneva when you're unemployed."

Yet he dreams of settling in the wealthy Alpine nation with his family.

"Switzerland has a very participatory democracy. There is a lot of transparency in politics… I would like to live in a place like that," he said, adding that in Spain, "we feel like we're being had every day."

"There is no future in Spain," agreed Gomez, who is living with his brother in Geneva while he looks for work.

He said he had immediately thought of Switzerland when he decided to leave his home country, "because everyone knows there is work in Switzerland (and)
because the salaries are so much higher there than in other countries."

According to a report published by Swiss bank UBS in September, Zurich and Geneva are two of the cities with the highest salaries and the best purchasing power in the world.

Vaughn-Whitehead said Switzerland is definitely one of the most attractive destinations for austerity-hit Europeans.

"There is such a gap between the average wage in Switzerland and for instance Portugal now that it really motivates migration," he said.